One of the first things people ask is where did the name coleslaw originate? The Dutch made a version called koolsla, kool meaning cabbage and sla salad. The Dutch sailors prepared their salad by almost pickling the cabbage in a vinaigrette style dressing, obviously giving it a longer shelf-life. They left their recipes all over the world, allowing many variations to develop. The word kool was anglicised to cole and slaw worked quite well as salad, hence coleslaw.

Then what dressing to use? The Americans prefer a creamier dressing, so it usually has a base of buttermilk, mayonnaise or other cream-style dressings. In Europe a  dressing in the vinaigrette style, is favoured, but these differ vastly from Eastern to Western Europe. So, for dressings there is no rule!

As for the ingredients! The original European recipes appear to have white (green) cabbage and carrot, but there are dozens of variations using apple, celery stalks or fennel bulb and seeds, pineapple and even broccoli stems.  I love adding red cabbage, as the Europeans often do, for colour, flavour and most importantly those red-hued anti-oxidants. So again, there are no rules!

With the emergence of ‘fusion cuisine’, we also see many Asian variations such as the Korean Kimchi, that is fermented and the Chinese have the lightly fermented Pao cai, which is often served for breakfast.

As we are encouraged by nutritionalists to eat more veggies from the brassica group (includes all forms of cabbage, kale, broccoli, cauliflower and even mustard) I am more vigilant in trying to include at least one or more in my weekly shopping basket.

We are not keen on the heavy mayo-based versions, even though I think I may experiment with buttermilk, but that’s for another occasion.

As you by now realise I love the Asian flavours, so my favourite coleslaw recipe uses both red and green cabbage. If I can find Chinese cabbage I buy it. It is greener, the leaves are beautifully curly and the flavour seems to be more delicate. I always add carrots and I cannot resist a handful of dried golden sultanas or cranberries for a pop of flavour. In summer I often add red or green seedless grapes. 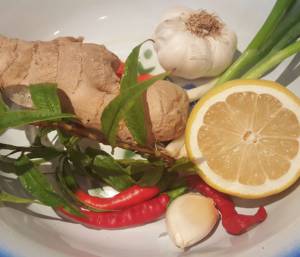 Added texture is provided by roasted cashew nuts, slivered almonds or peanuts, but personally I am not mad about the latter! Some recipes use crisp, uncooked Chinese pot (2-minute) noodles that are crumbled over the slaw. Crisp bean sprouts or slivers of water chestnut are also good.

As you can see, once you start experimenting you can add your personal touch to the basic recipe. That’s what interesting cooking is all about.

The joy of this dish is that it improves after a few hours, so I often make it a day ahead and make extra volumes so that we have it to enjoy for another day or two.