Tiramisu, one of Italy’s favourite desserts!

Most of Italy’s traditional recipes date back for centuries, but this iconic dessert is fairly young. In the 1960’s a chef in the Veneto region prepared it and it was an instant hit! In fact, so much so that the name tiramisu translates as ‘pick me up’ or ‘cheer me up’! Historical records claim that Tiramisu had aphrodisiac effects when served in the brothels of Treviso, the town where it was invented! It is delicious, but it does not quite reach those claims in my books!

On our recent trip to Italy I was determined to try as many as I could just confirm that my taste buds were on the right track! Generally try not to eat dessert but I must admit that I would rather forgo the pasta in an Italian restaurant in favour of the tiramisu!

I enjoyed a few in restaurants and was fascinated by an entire ‘take out’ shop dedicated to Tiramisu in the centre of Rome. It claims to serve the best Tiramisu in Rome. 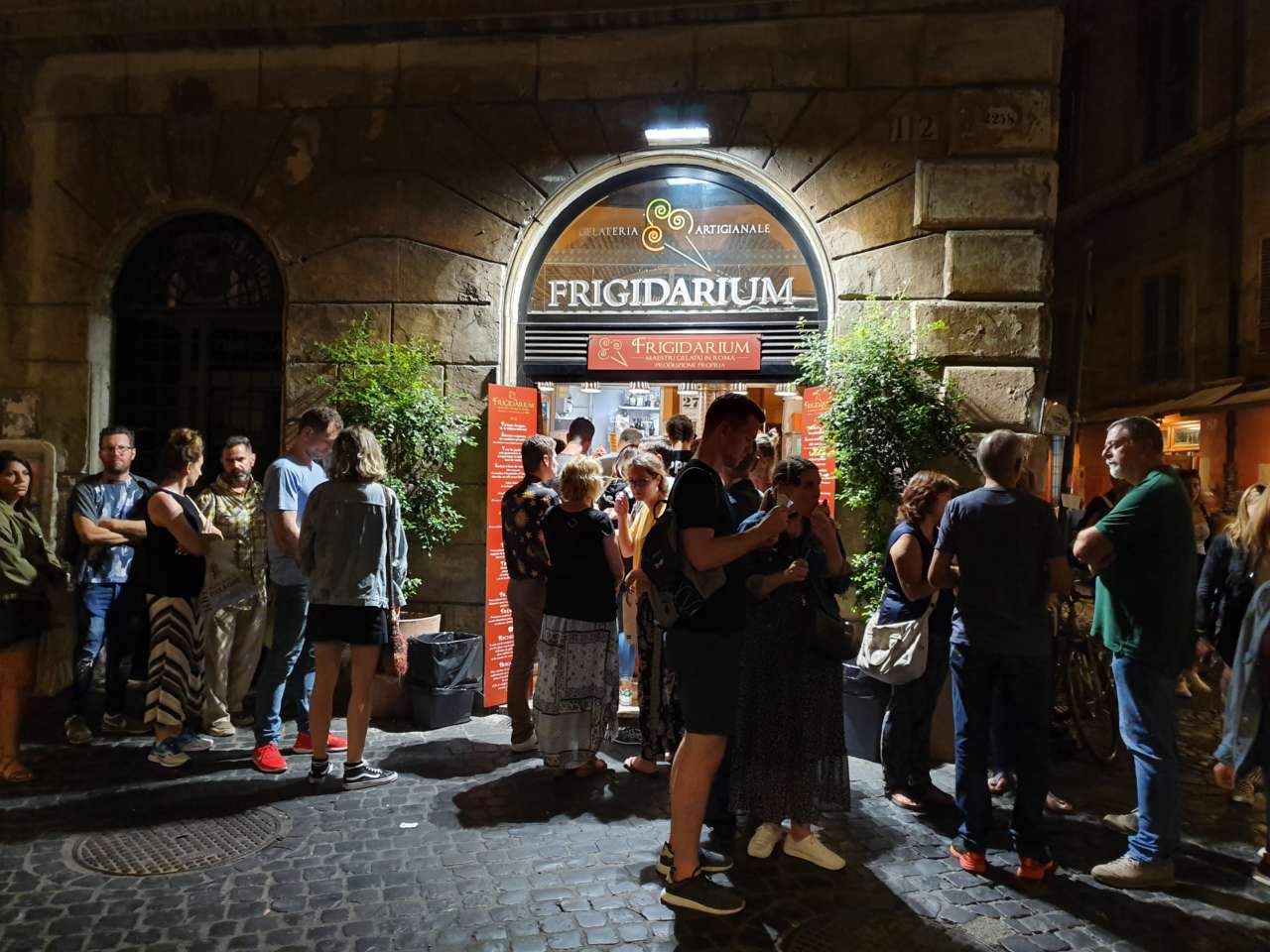 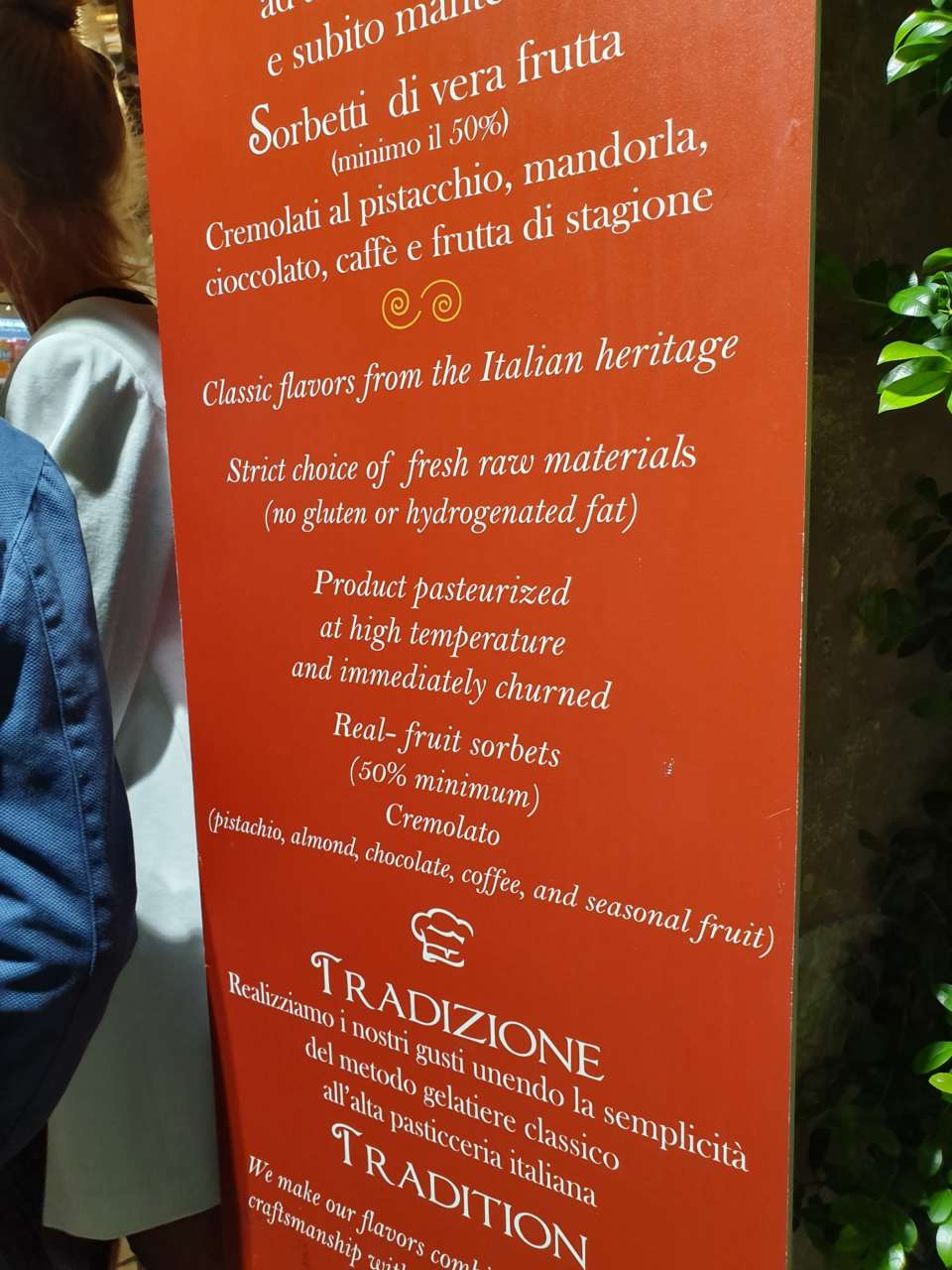 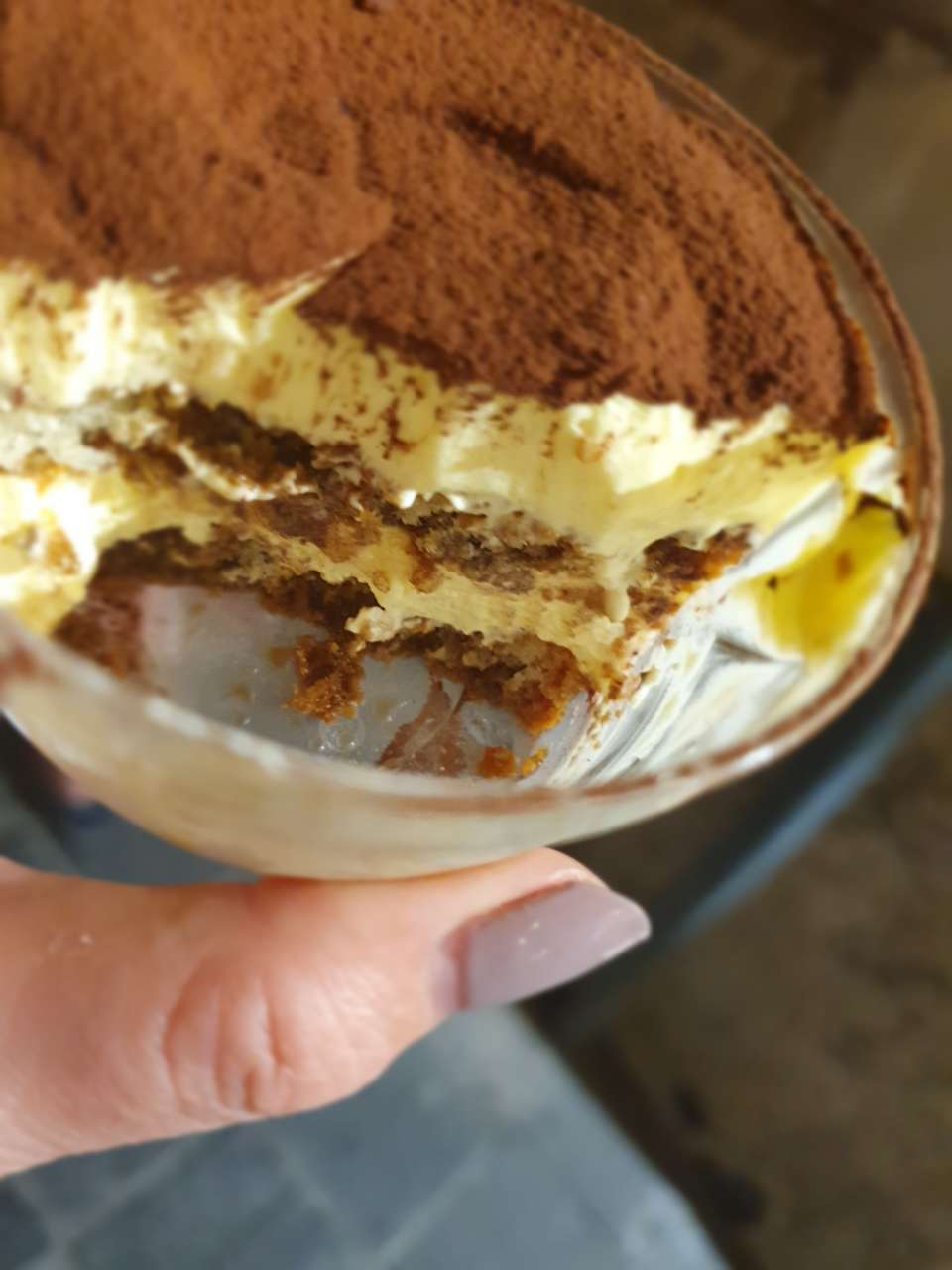 There were queues day and night. Everyone was walking down the street eating Tiramisu, so of course, I had to join in! It smacked of ‘commercialism’ despite the signage with words like ‘artisanal’.  Somehow a plastic tub with a sealed lid does not whet my appetite! The glass fronted fridge had shelves of Tiramisu variations: traditional with or without alcohol, pistachio and almond. One of our group bought the pistachio…. Yummy! I tried the Traditional and it was surprisingly delicious! It really ticked all the boxes regards texture and flavour despite the plastic container!

I have enjoyed Tiramisu prepared by famous Italian food writers Marcella Hazan and Valentino Harris. Both were delicious and I have prepared their recipes often.

Back in South Africa, a few weeks later, I tried a dessert similar to tiramisu, described as Dolce della Nonna (Granny’s Sweet/Dessert!) 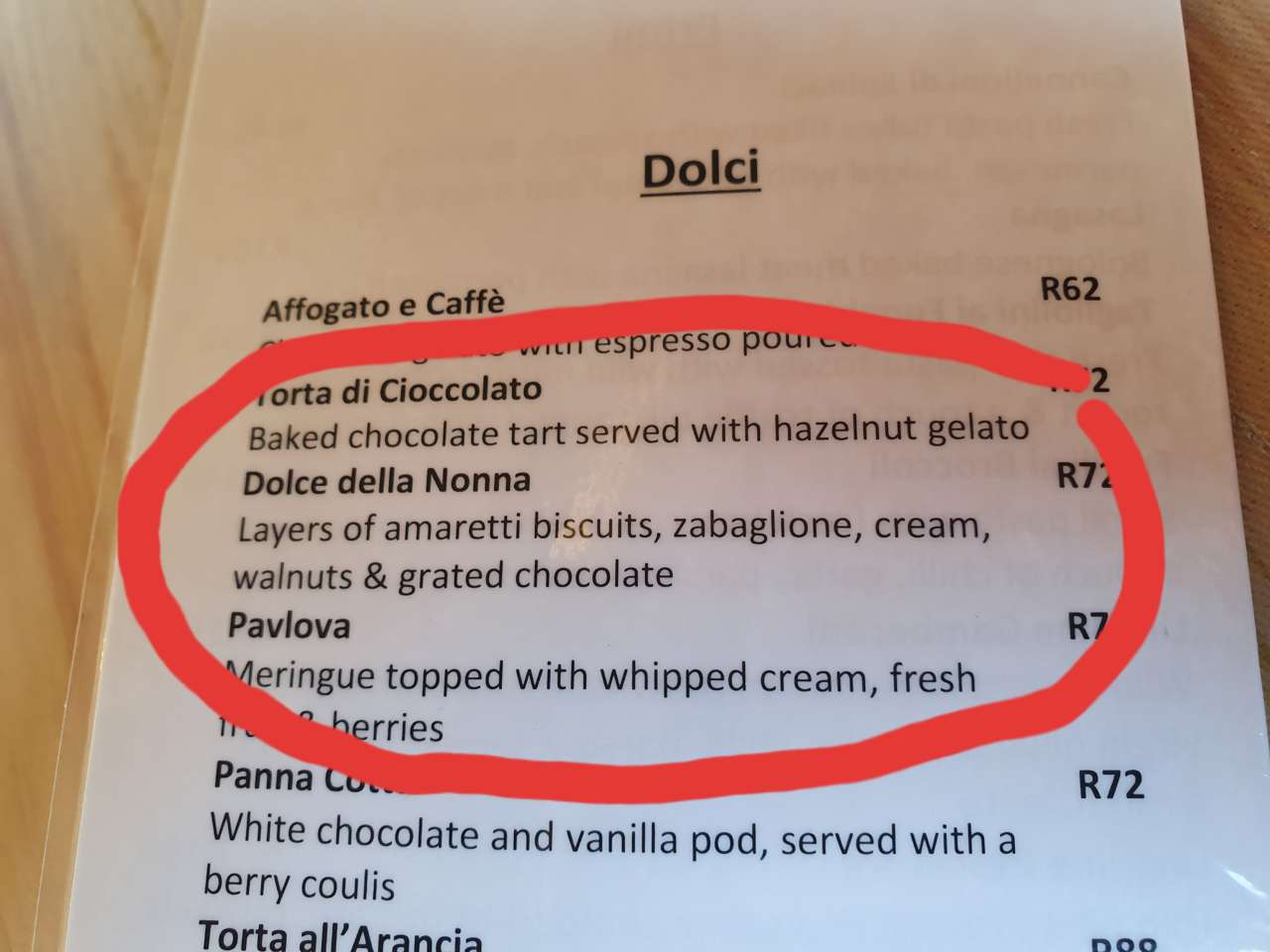 It was a delicious walnut, tiramisu-style dessert. I simply had to attempt to replicate it. Mine was not quite as delicious as Nonna’s. Next time I think I will chop up the Amaretti biscuits with the walnuts, and use less biscuits as they are very sweet. I have made these alterations in this recipe: Walnut and Amaretti Tiramisu. 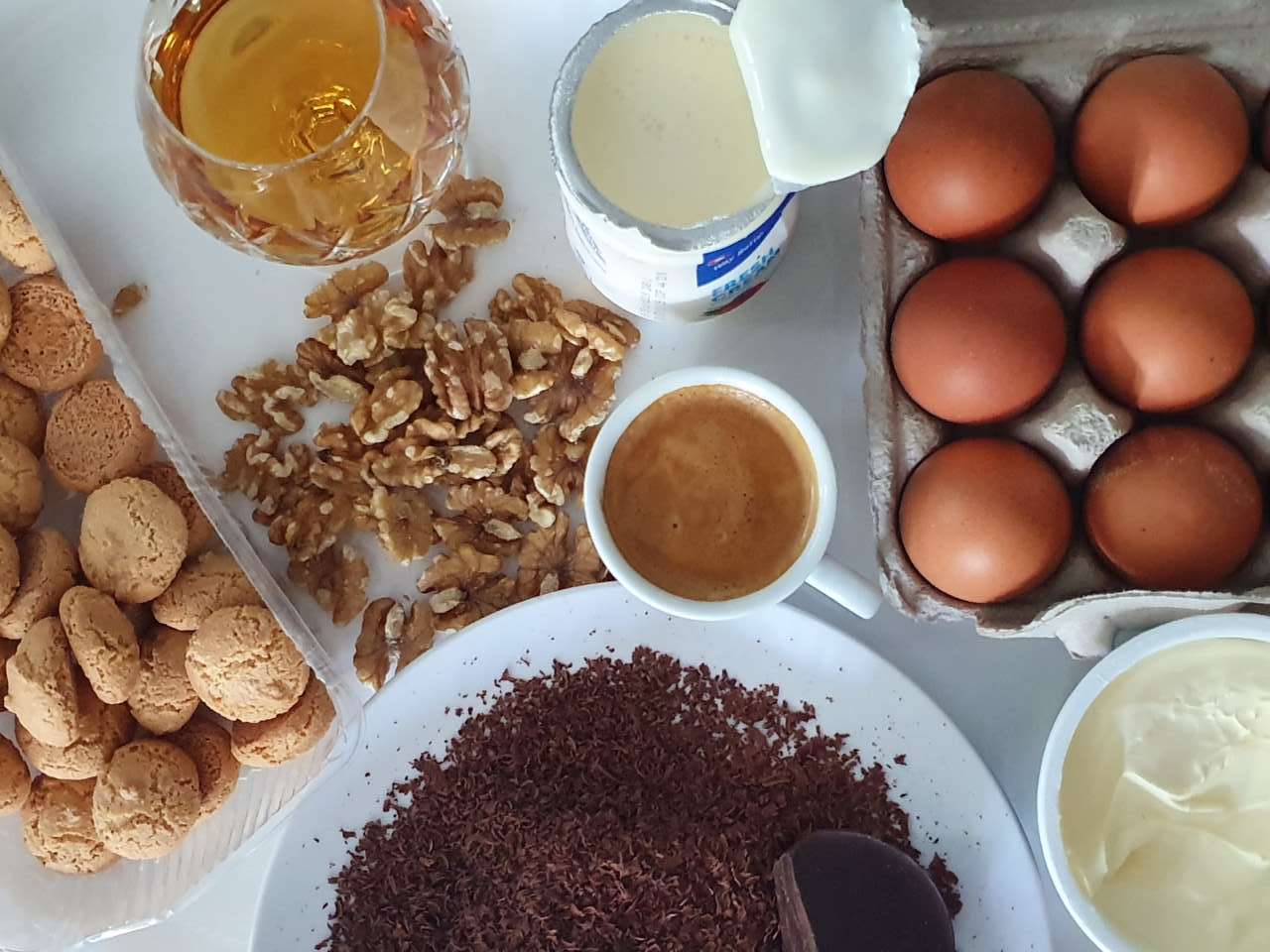 Serve it chilled or frozen. This is one of those desserts that you can make ahead and pop into the freezer. Either slice it frozen or allow it to partially defrost. If it fully defrosts it sometimes draws water.

Some people are ‘intimidated’ by the method of tiramisu. Once you have mastered the few watch points that I have outlined below it is really easy and foolproof!

A Tiramisu recipe can be divided into 4 distinct components: 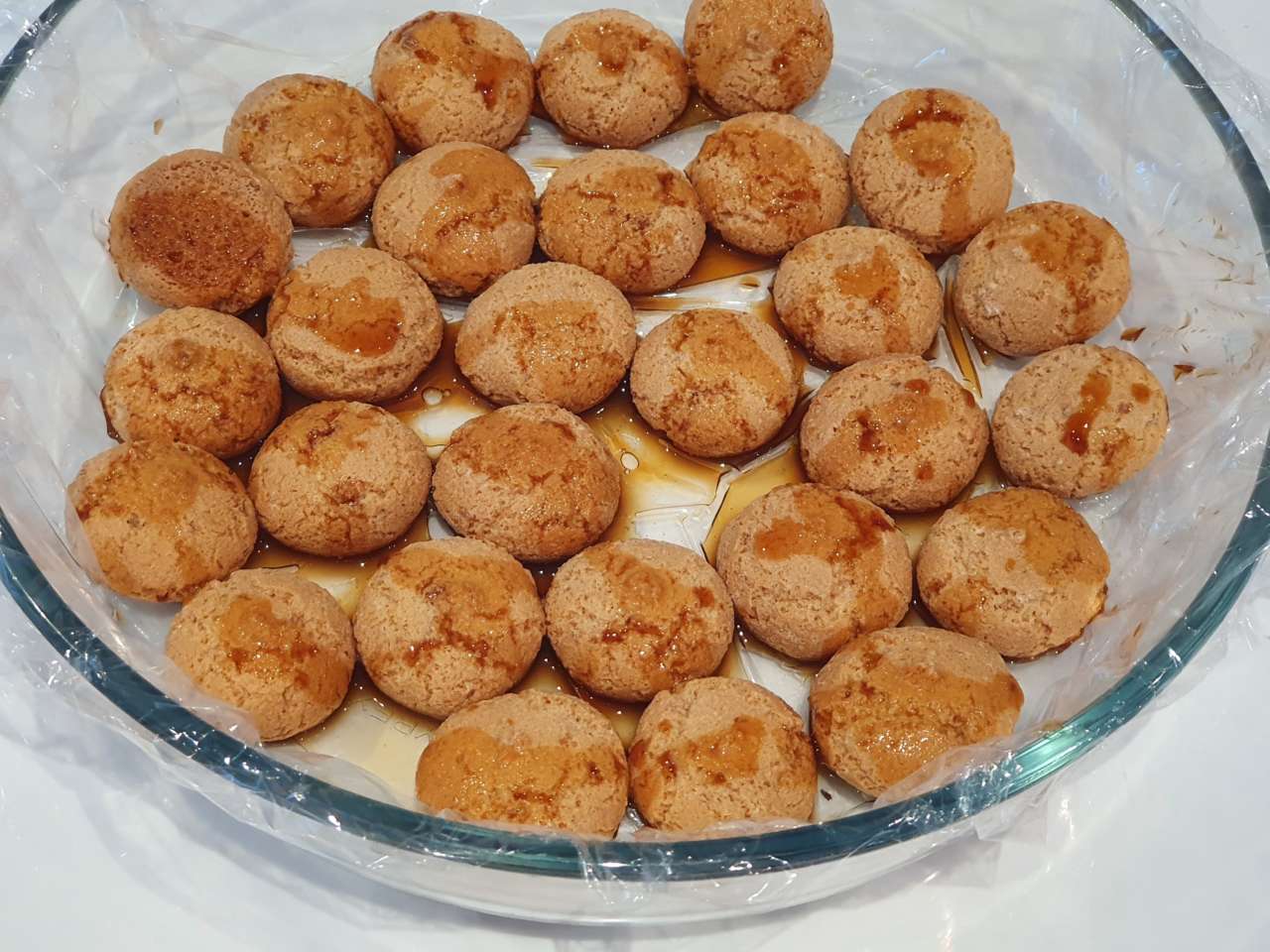 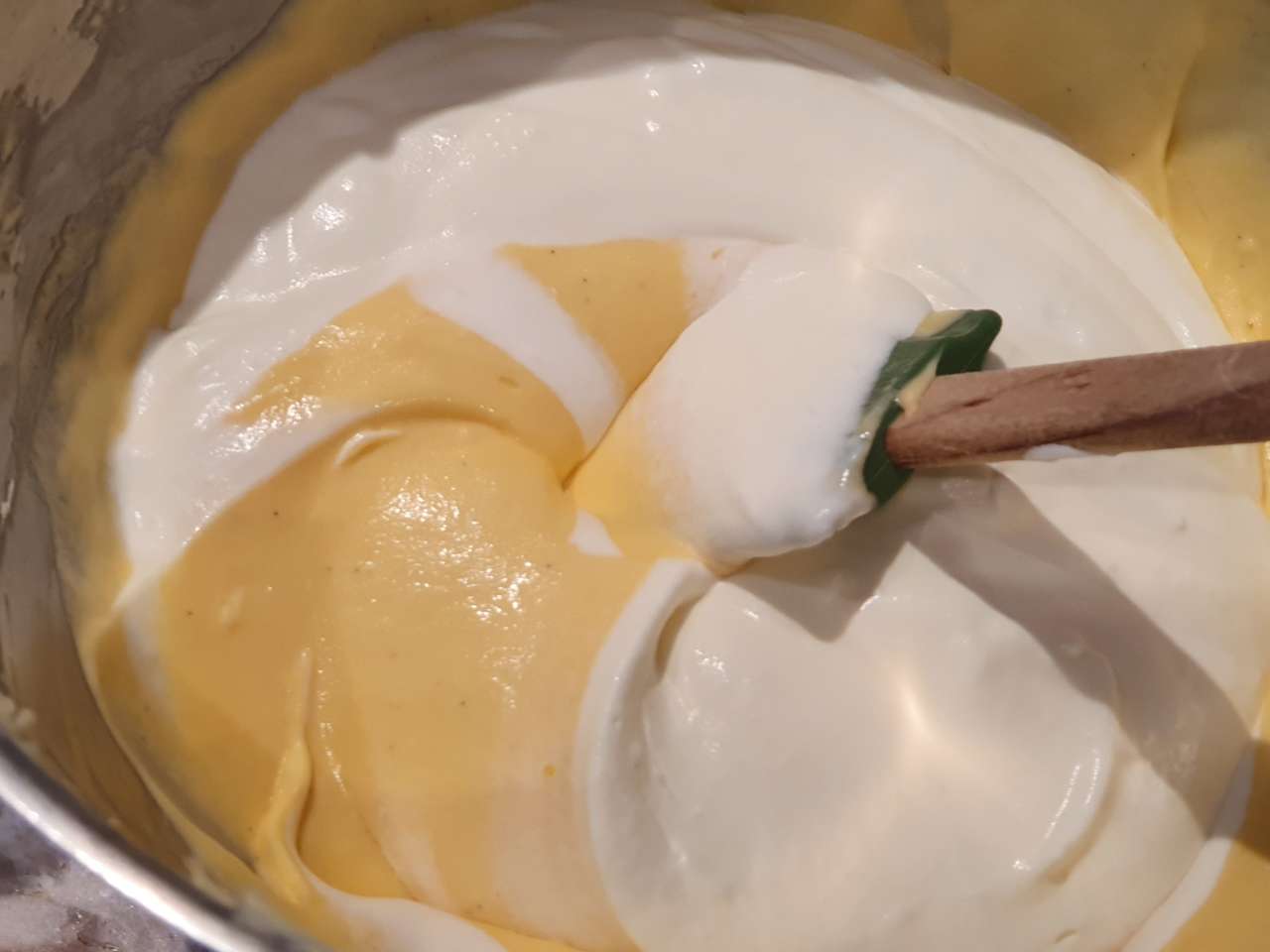 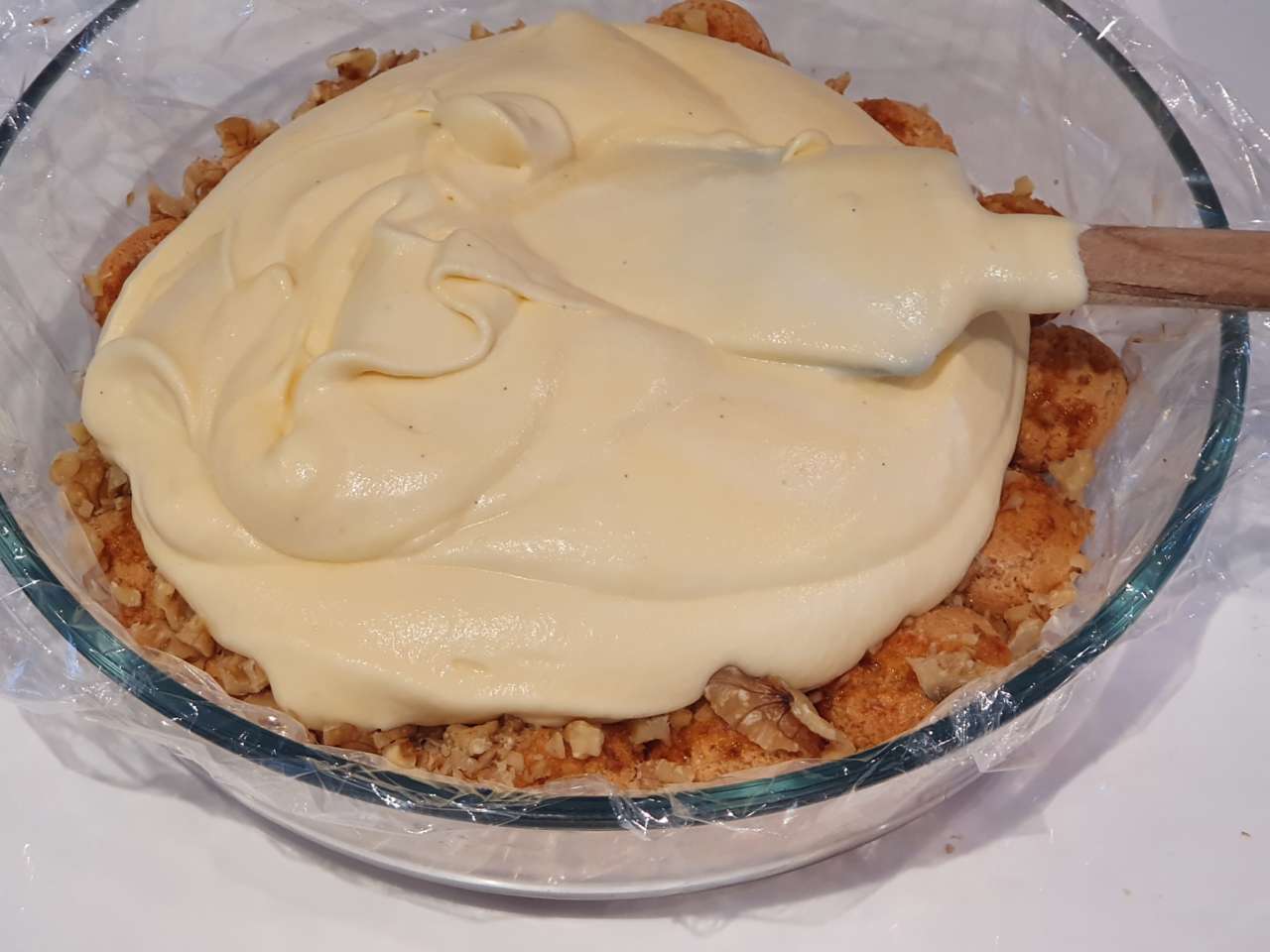 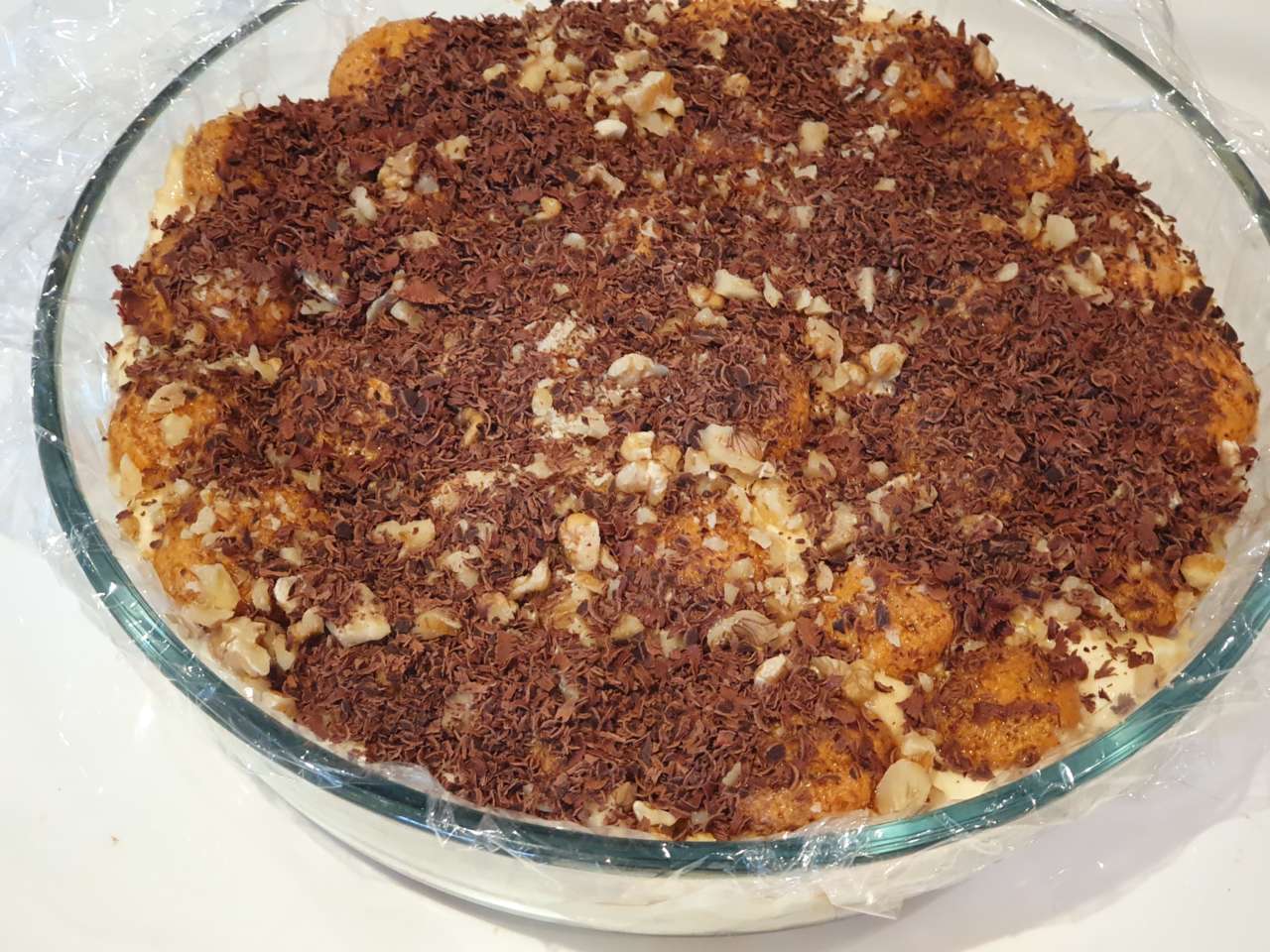 Sprinkle with chocolate and nuts

The biscuits are just dipped, not soaked in the coffee and alcohol mixture. Use a good quality espresso style or strength coffee. In Italy I saw alcohol free tiramisu on a few menus. I think that this caters for kids. My late Mother fed us Sherry Trifle, Cape Brandy Pudd and oh how can I forget that Christmas Cake and Pudd laced with Brandy! I think we survived that pretty well! In my opinion tiramisu needs a splash of booze. Traditionally Marsala wine was used, but recipes often use Italian Amaretto liqueur or Brandy. 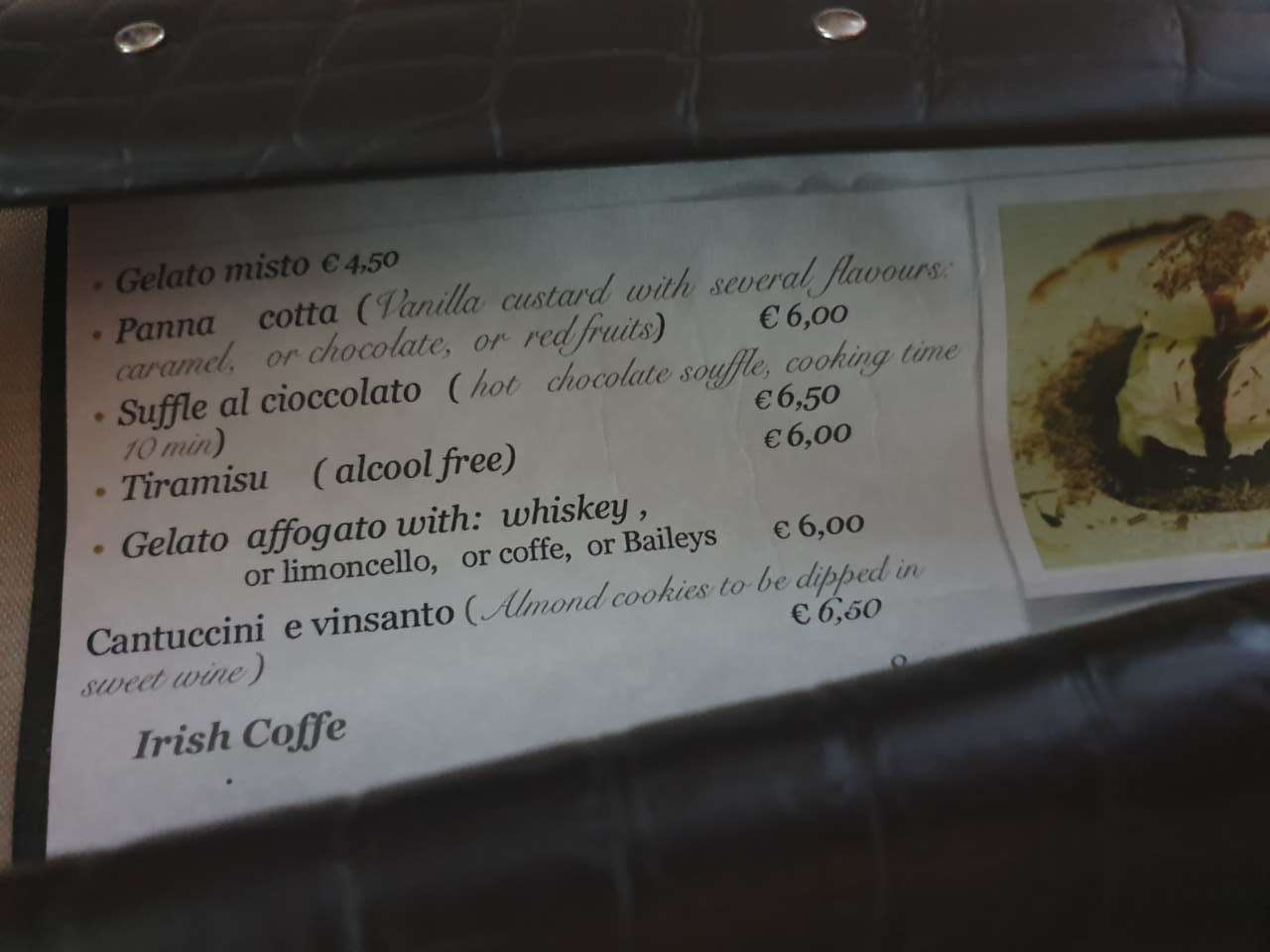 From an Italian menu…. don’t you love the translation of alcohol! And the prices 1E = R16,70 at the time!

What do you do with the whites when the recipe only asks for egg yolks? 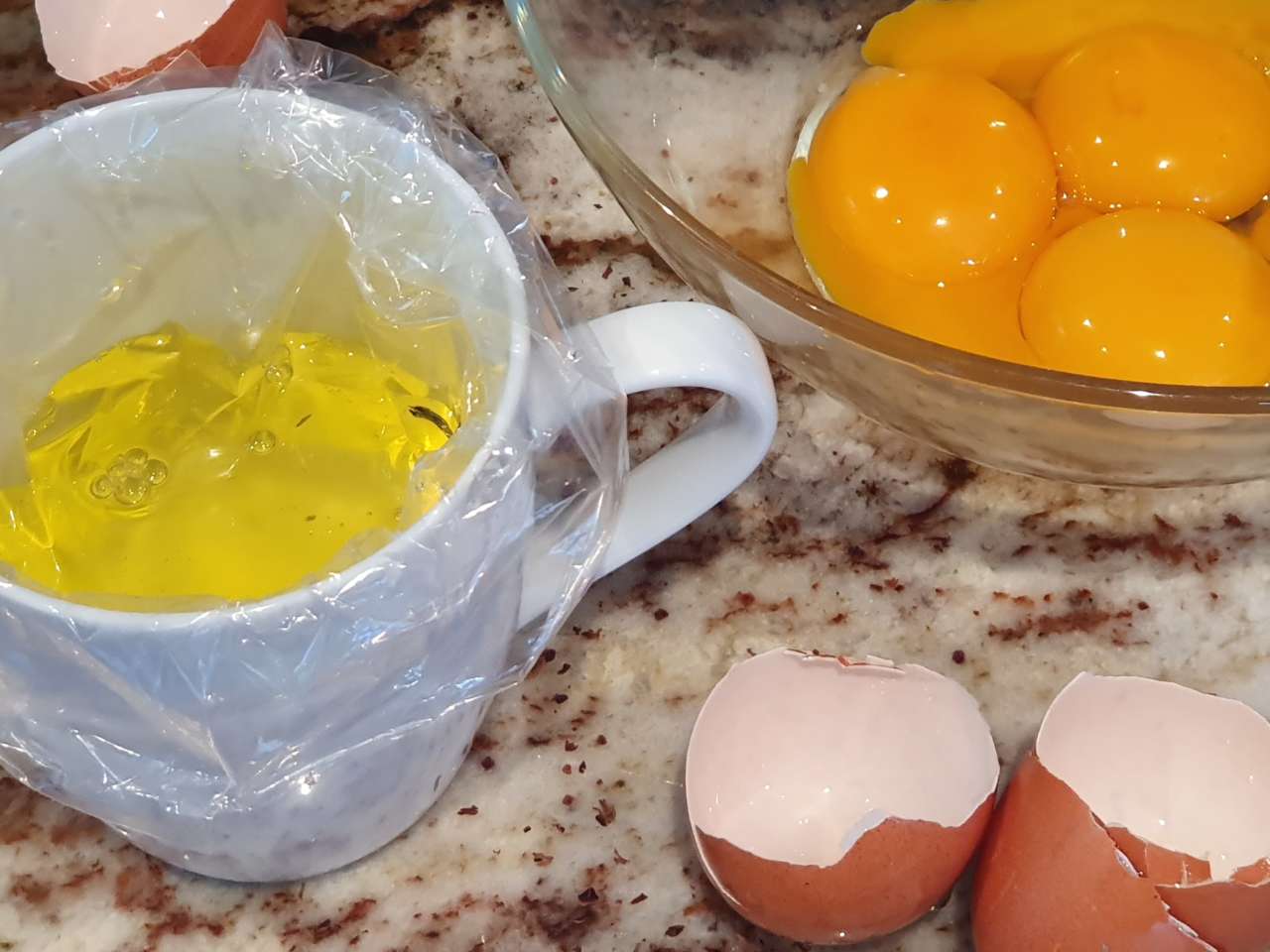 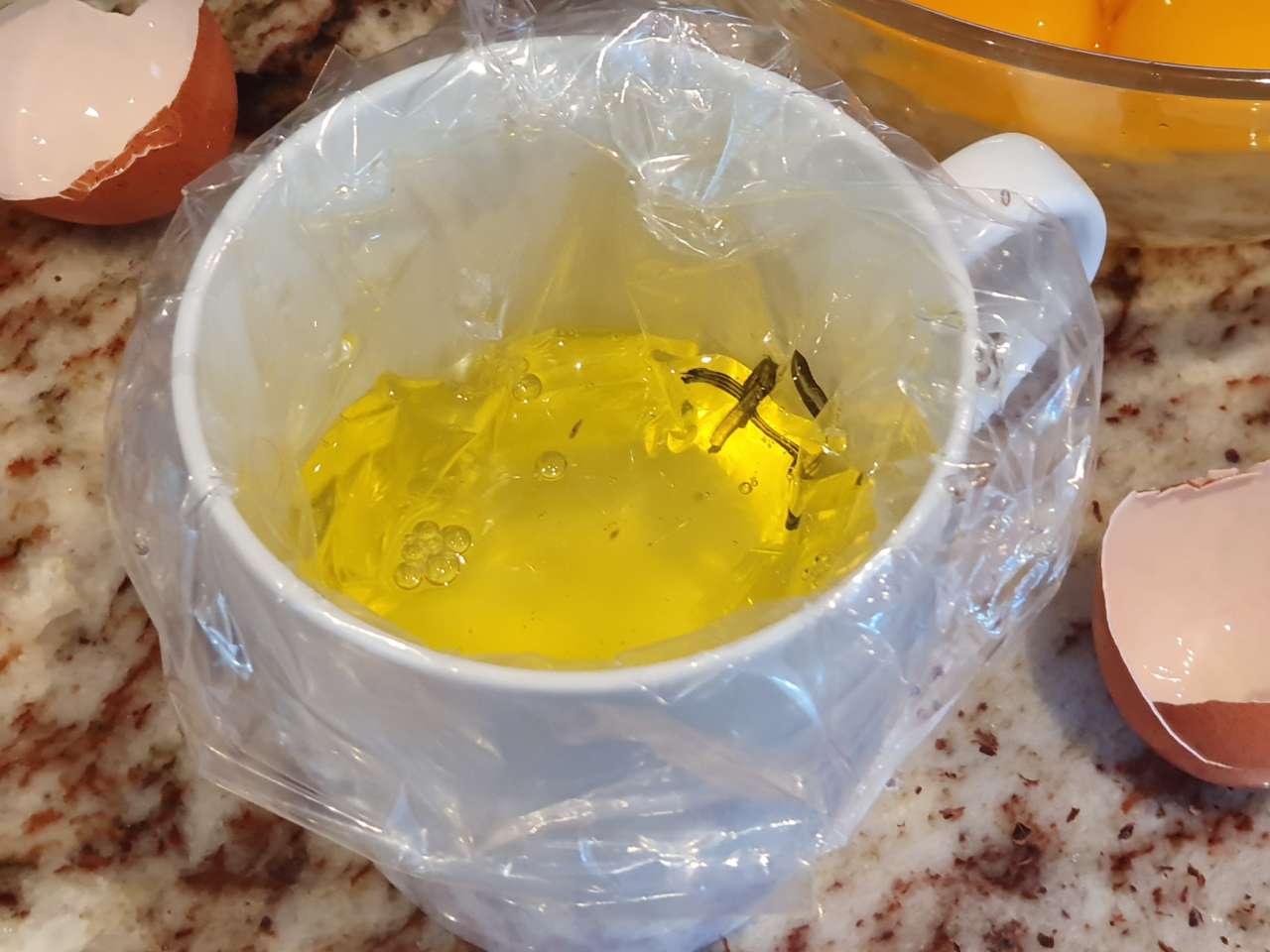 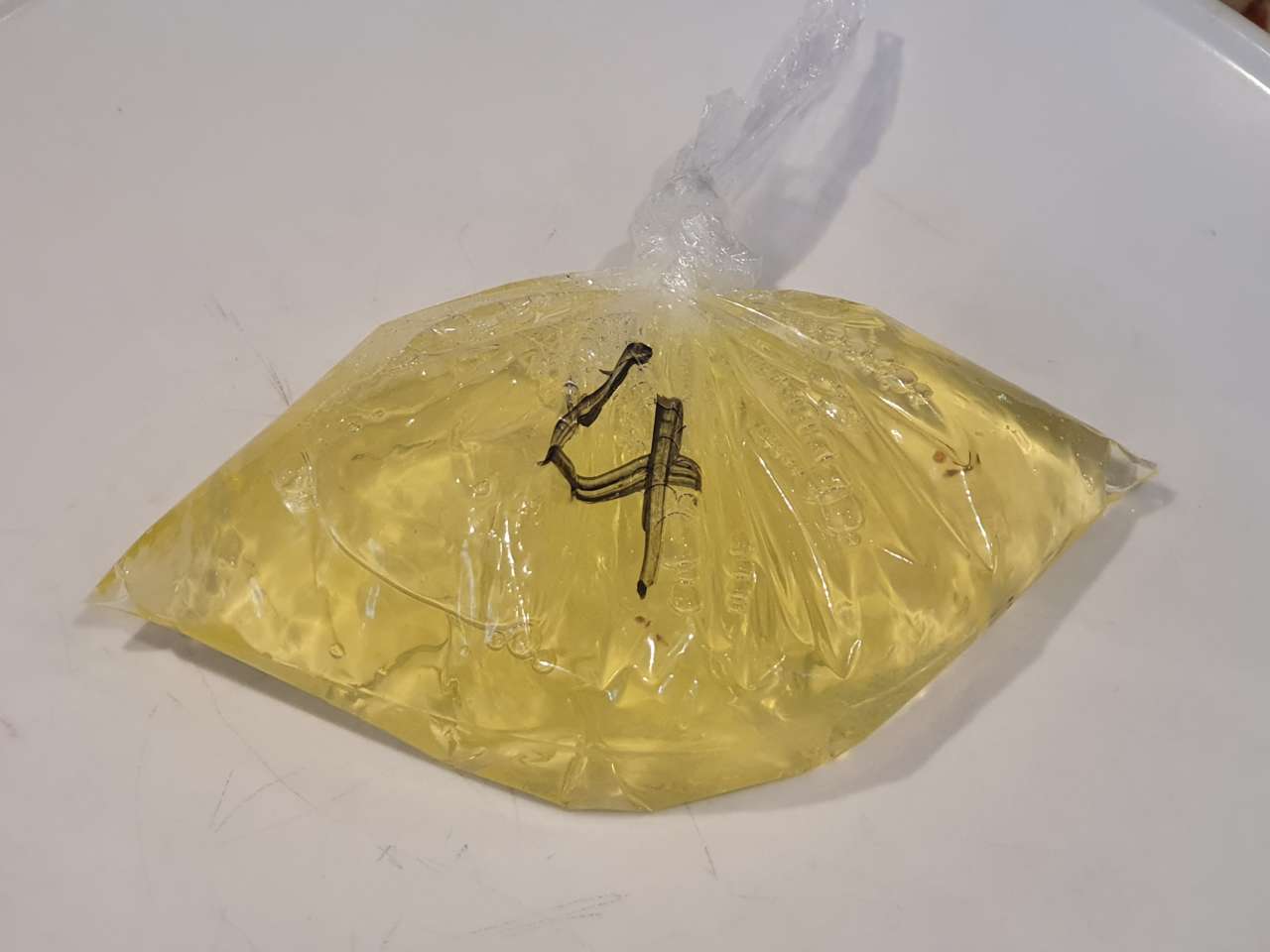