A wine tasting this week prompted me to share this wine experience with you! 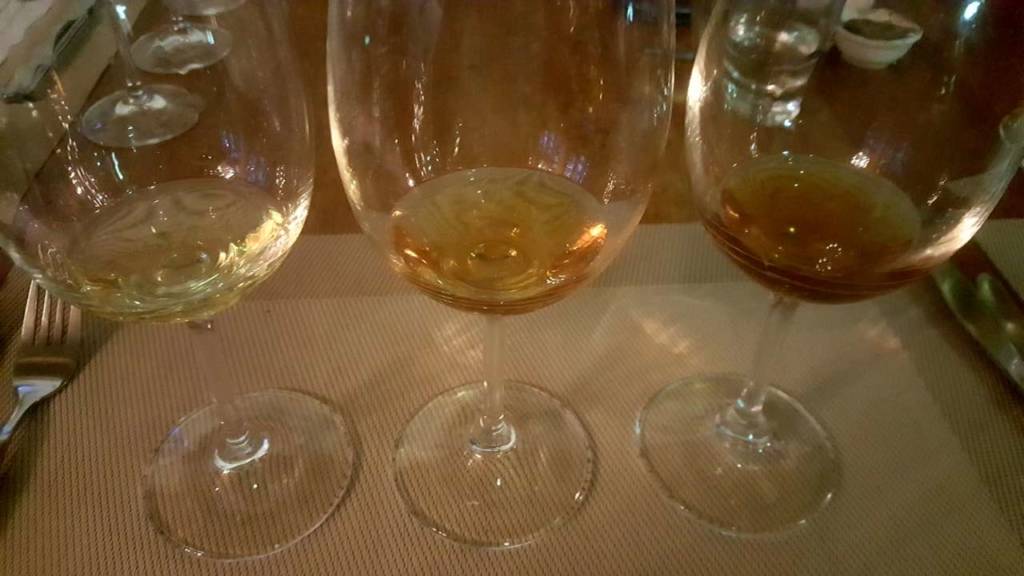 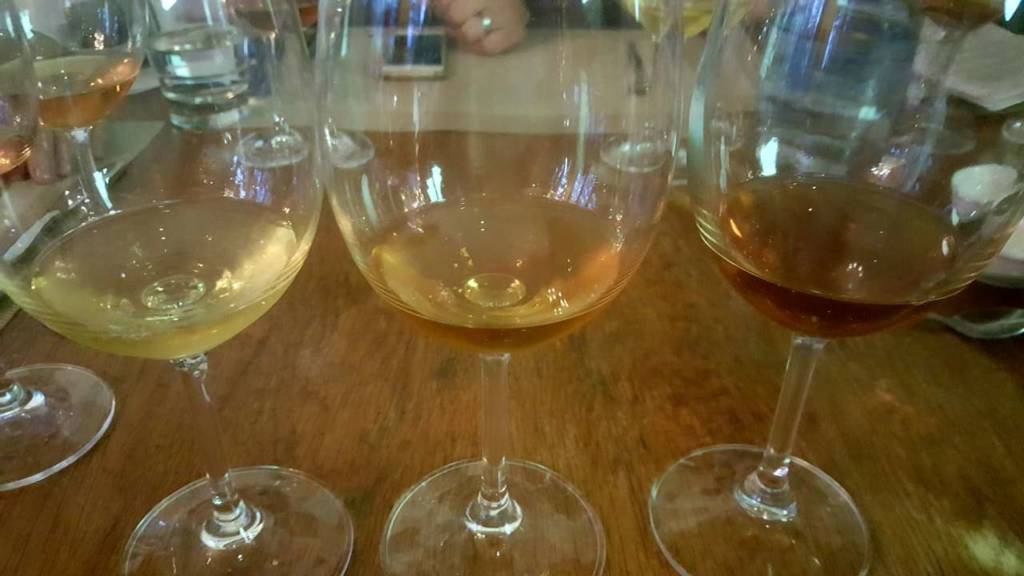 Situated in the Loire Valley, France in the Coteaux-du-Layon appellation (region), in the village Doué-La-Fontaine, is a rather unusual Chenin Blanc producer, Moulin Touchais.

Why is this wine so unusual?

When freshly made these wines will simply not be palatable as they are made specifically to age!

The wine making process starts in the vineyard, when as usual, the grape ripening is meticulously monitored and 20% of the grapes are picked virtually green (about 80 days after flowering) and 80% fully ripe (120 days after flowering). The wine is fermented in tanks and no wood in used. Soon after the fermentation is complete, around March, the wine is bottled, and then tucked away in the cool dark caves for at least 10 years! If the wine quality is not deemed fit for aging, the wine used for some of the other, younger wines that the Touchais family produces. 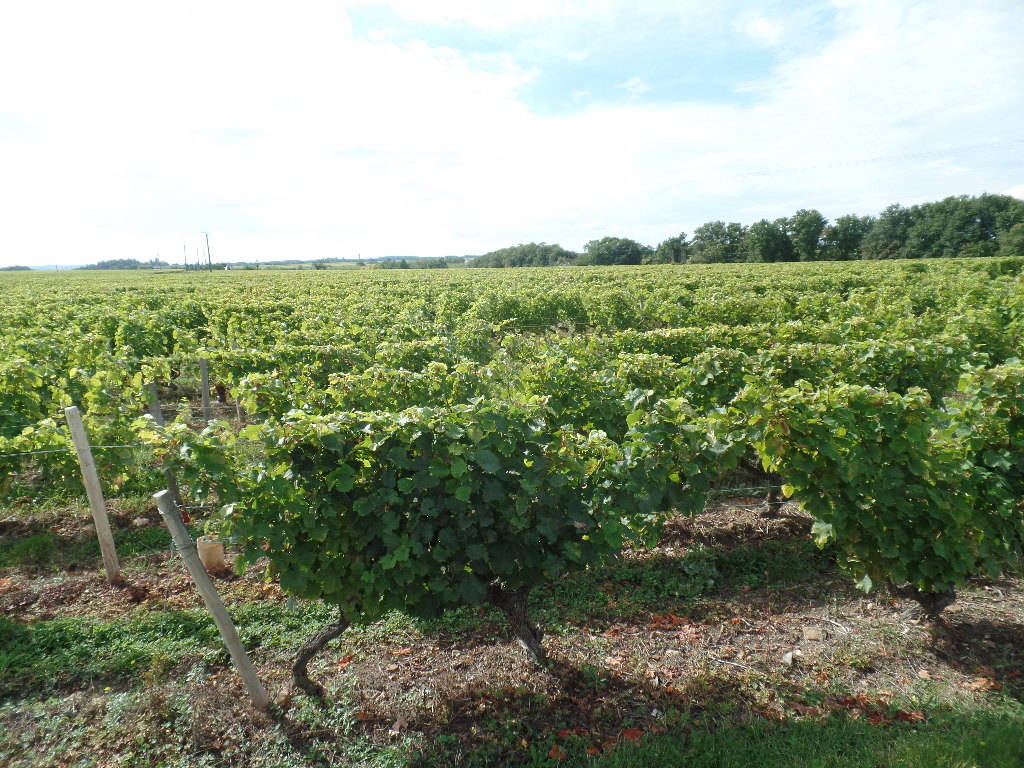 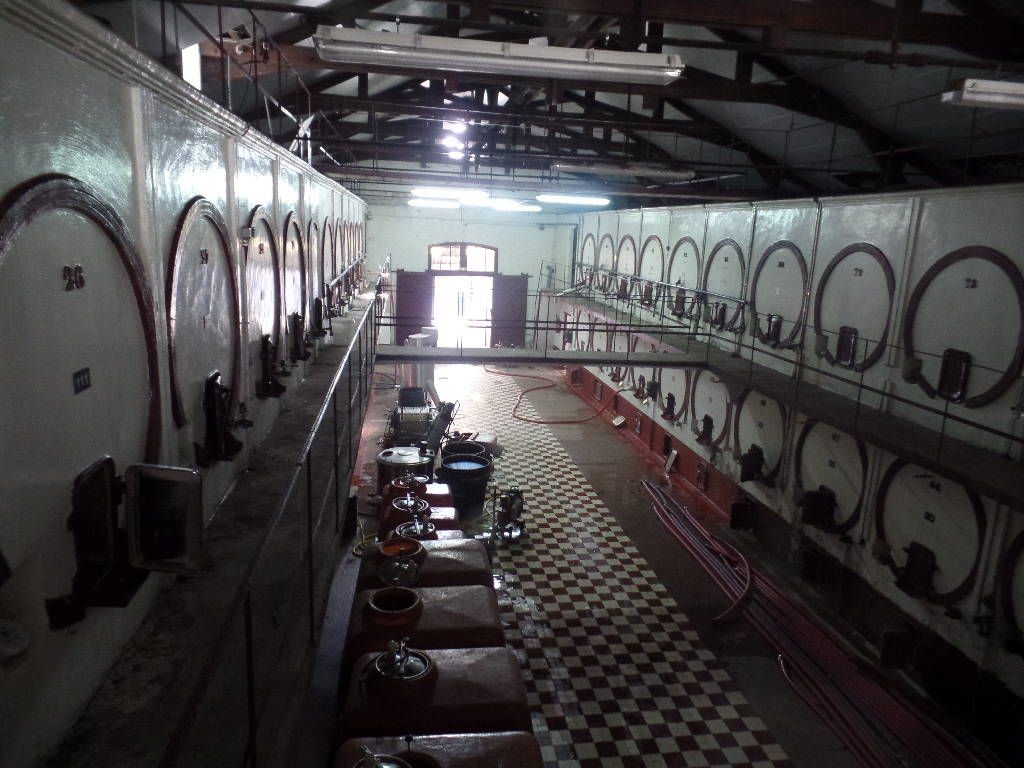 The resulting freshly produced young wine is probably badly balanced due to addition of those slightly unripe grapes, but after years of cellaring you get an unctuous, but not overly sweet wine, characterised with gentle flavours of apricot, nuts, floral from the chenin grape and  chalky minerality from the terroir. The remarkable characteristic that makes the older vintages so fresh is the amazing acid balance.

The wines all contain between 70 and 80 grams of residual sugar and, like with many other similar examples from the Loire, they only really come into their own after two decades in bottle. The wines seldom contain botrytis. Usually Special Late Harvest or Noble Late Harvest (Botrityised) wines contain 150g or more of sugar, so these wine are not overly sweet. 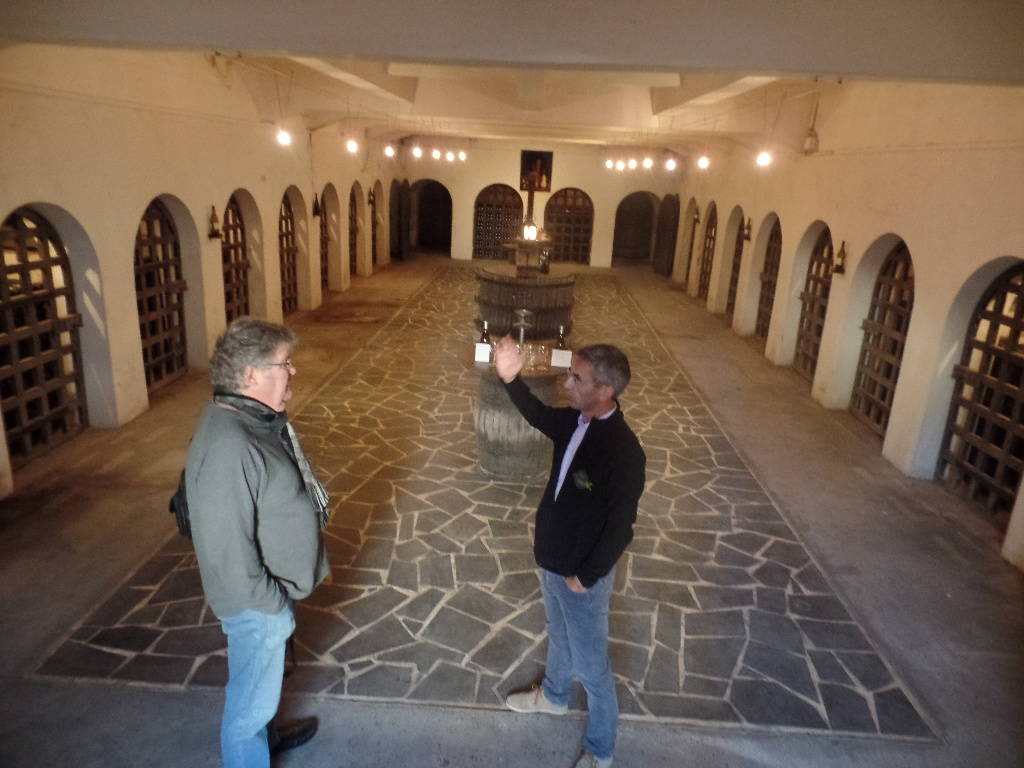 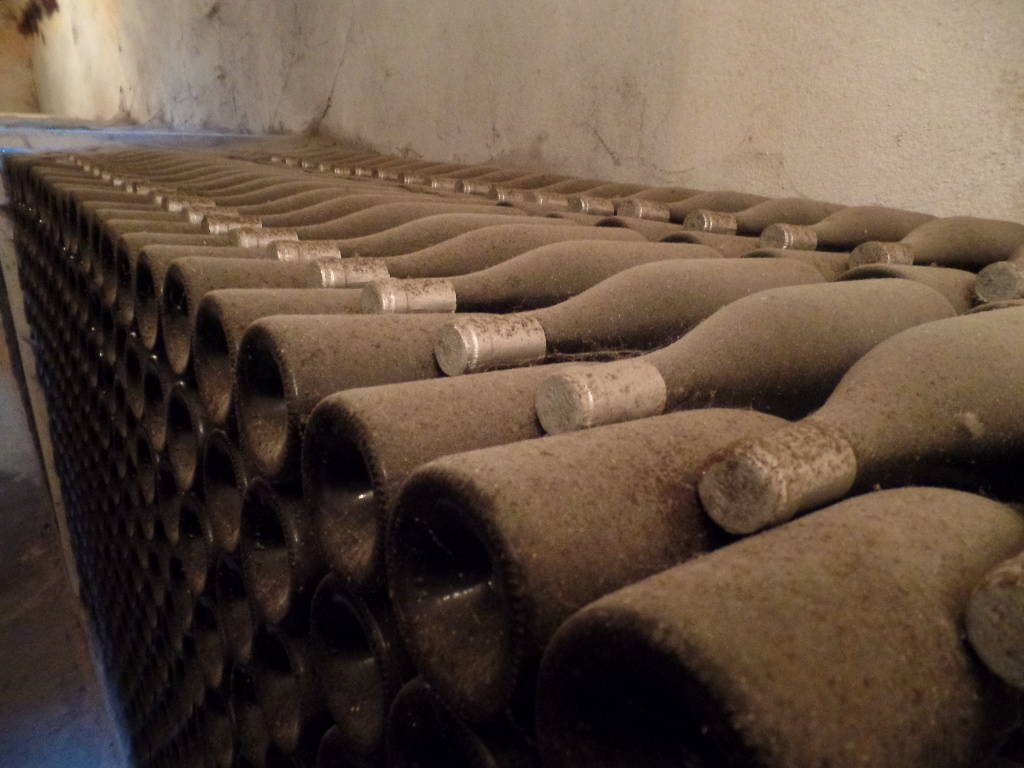 Millions of bottles in 15 kms of underground cellars or caves

These are relatively unknown wines on the international market and I was only introduced to them when I met Mark (my husband) who has an enthusiastic interest in sweet wines. In September 2014 we visited the Moulin Touchais cellars.

Some years ago the wine journalists were highly suspicious of these old vintages entering the market from a relatively unknown producer. In fact the source of the wine was regarded with suspicion. Where do these old wines come from? It must be a fraud, they asked?! I don’t blame them…… we found the village and the street via GPS but drove up and down a few times before we saw an unmarked alley between two houses with corresponding street numbers, so we ventured down to find a large unmarked gate and at least there was a bell! Yes, this was indeed the home of Moulin Touchais. I hasten to add, we did have an appointment!

No glamorous Chateaux or manicured gardens, just a rather plain, uninteresting building! An office block!

Once indoors we were warmly welcomed by the Marketing Director and then we enjoyed a tour. What a revelation. More than two million bottles of wine are stored in a labyrinth of underground cellars. Yes, 15 kilometres of underground cellars revealed a treasure trove of several vintages, all maturing until they are deemed fit to release onto the market! 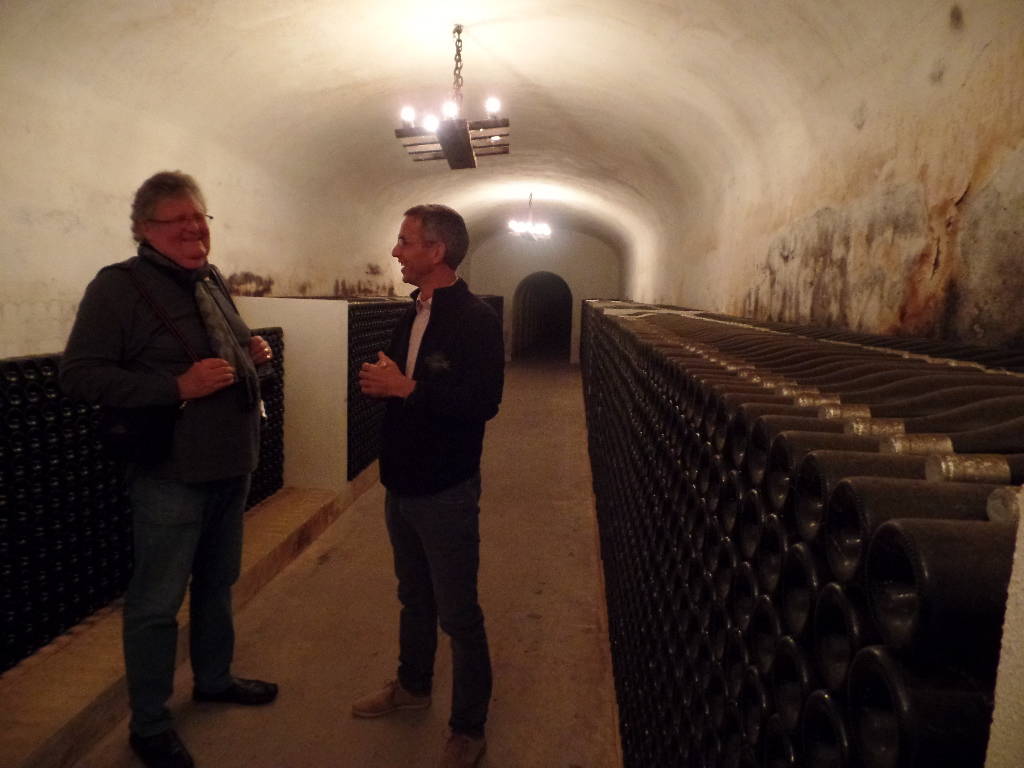 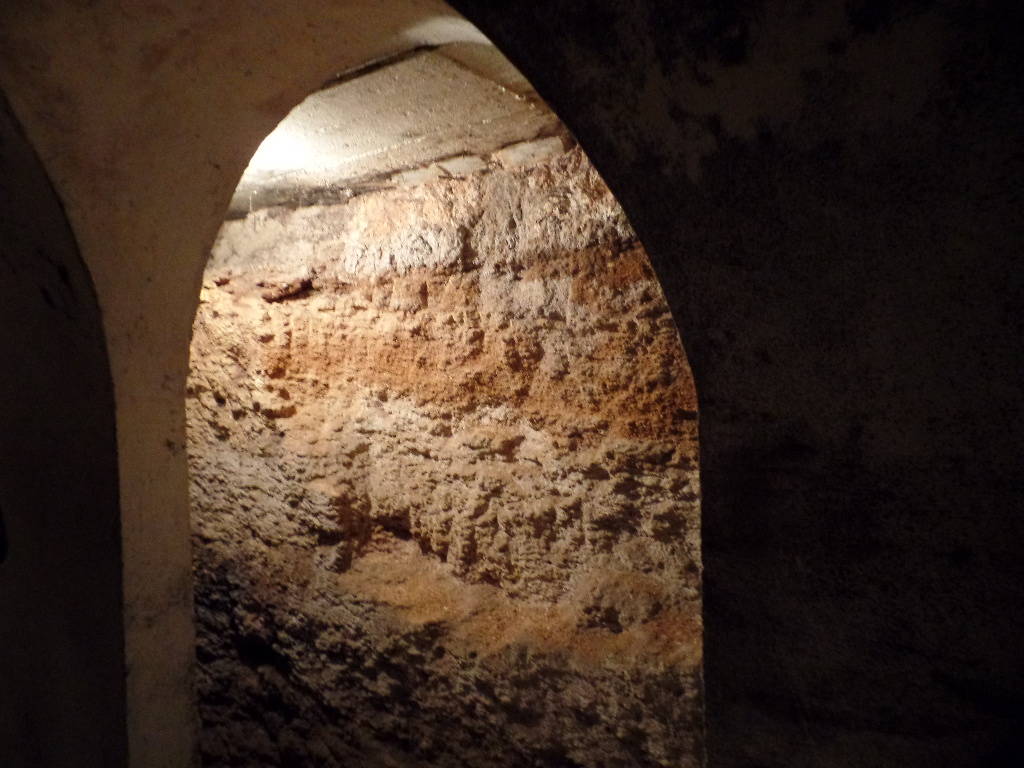 As you can see in my photos, the bottles get rather messy and occasionally there is some deterioration of the cork. So when the wines are ready to release the bottles are cleaned up and if necessary any leakage is topped up with wine from the same vintage and the bottles are only then labelled. 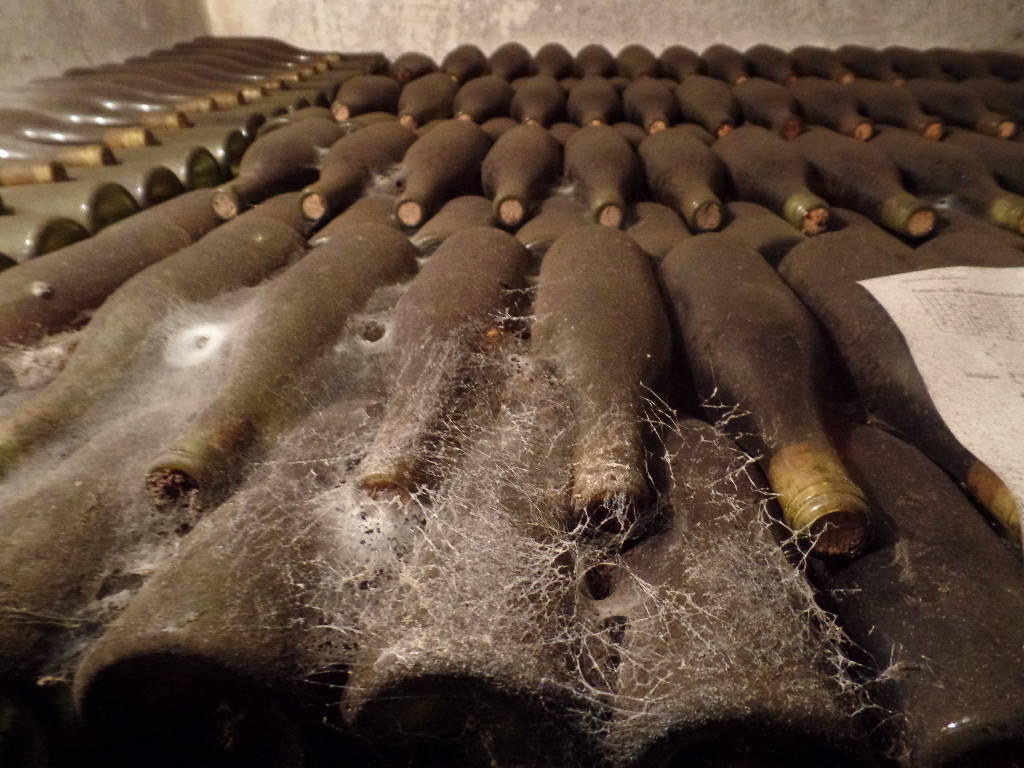 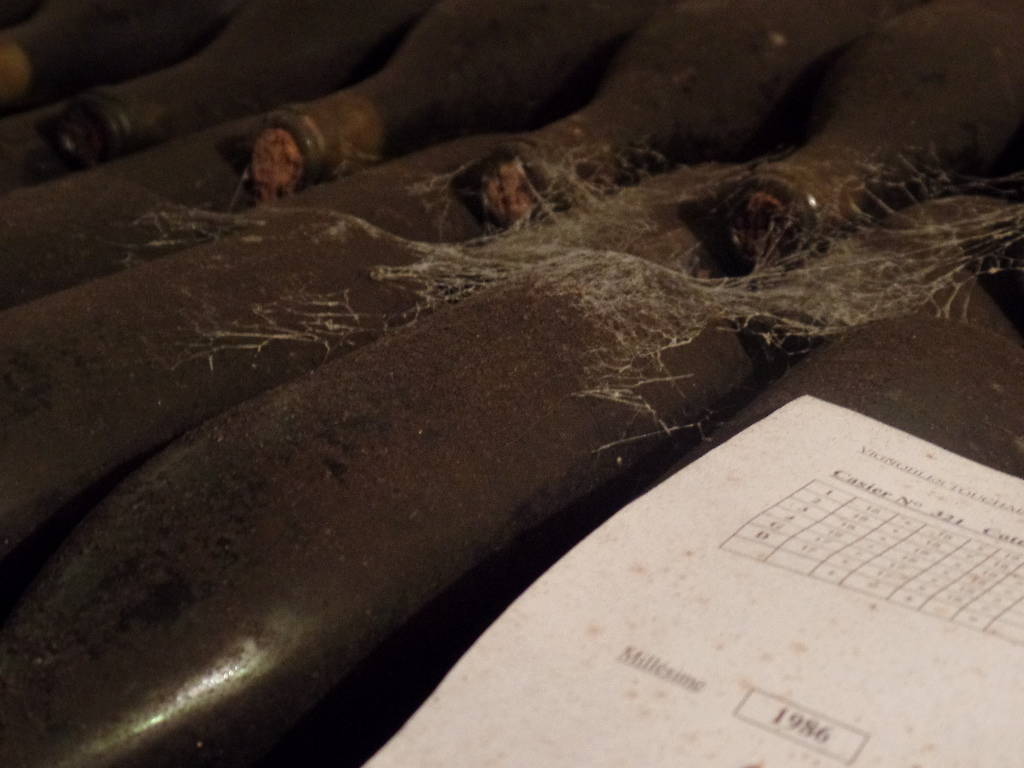 Vintages recorded on each batch 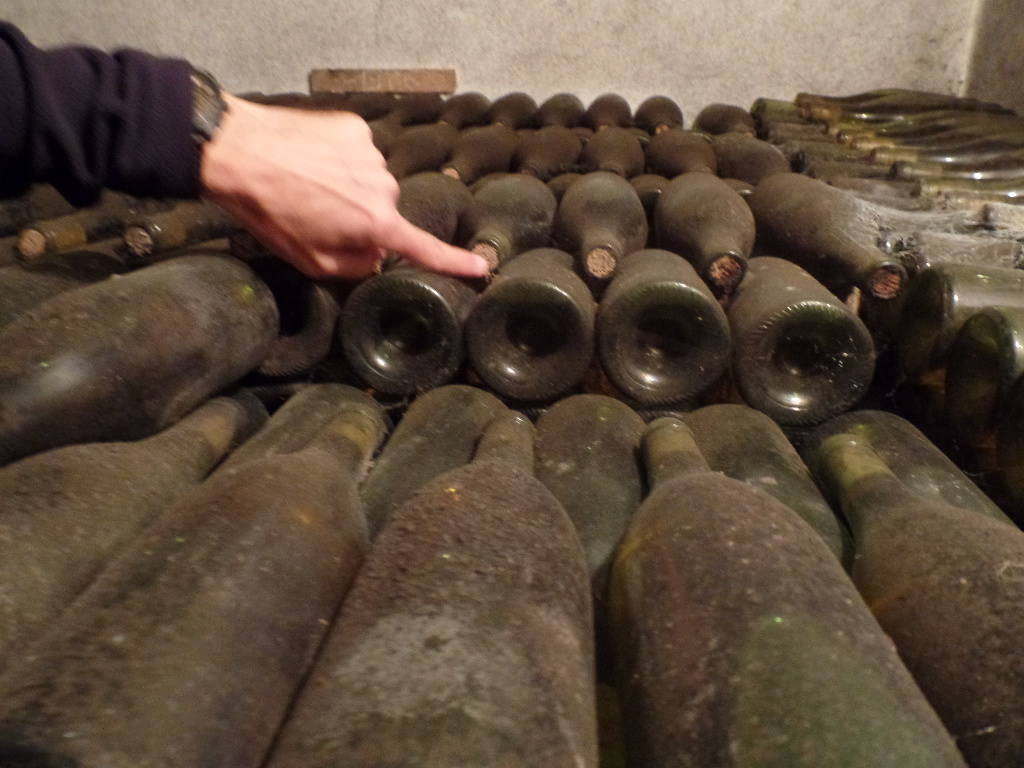 Some corks do not look good!

Currently various vintages between 1971 and the most recent release, 2004, are commercially available.

These cellars must contain one of the largest and oldest wine collections in the world, including a rare collection of ancient wines the oldest dating back to the mid 19th century!

Millions of bottles in 15 kms of underground cellars or caves 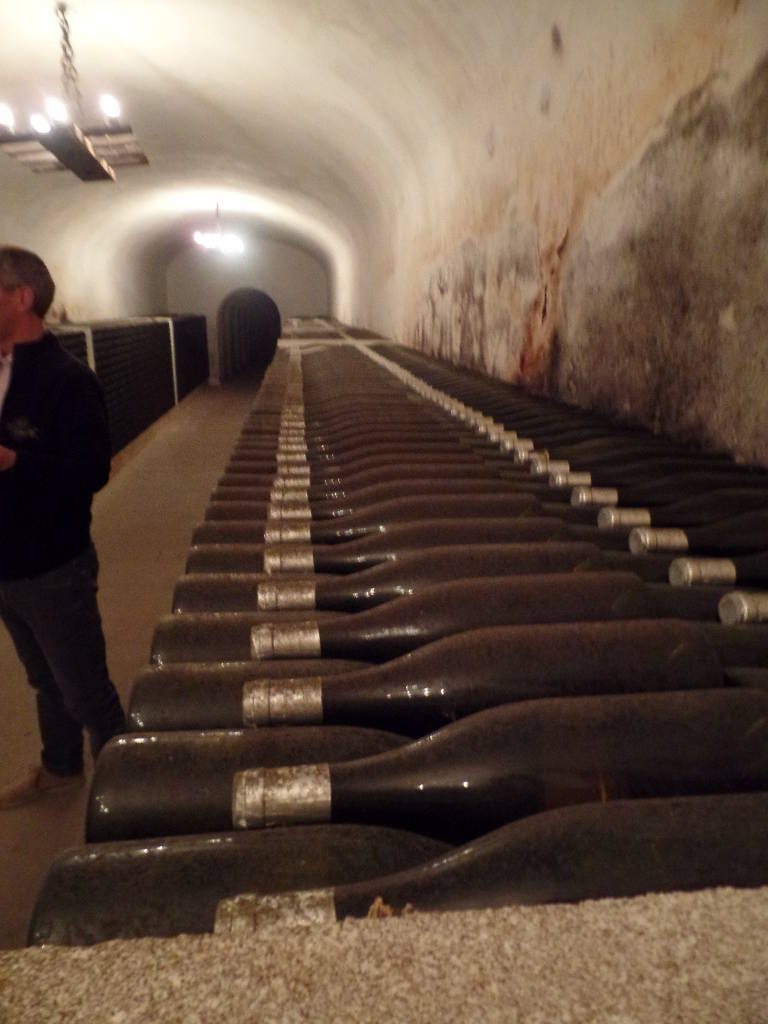 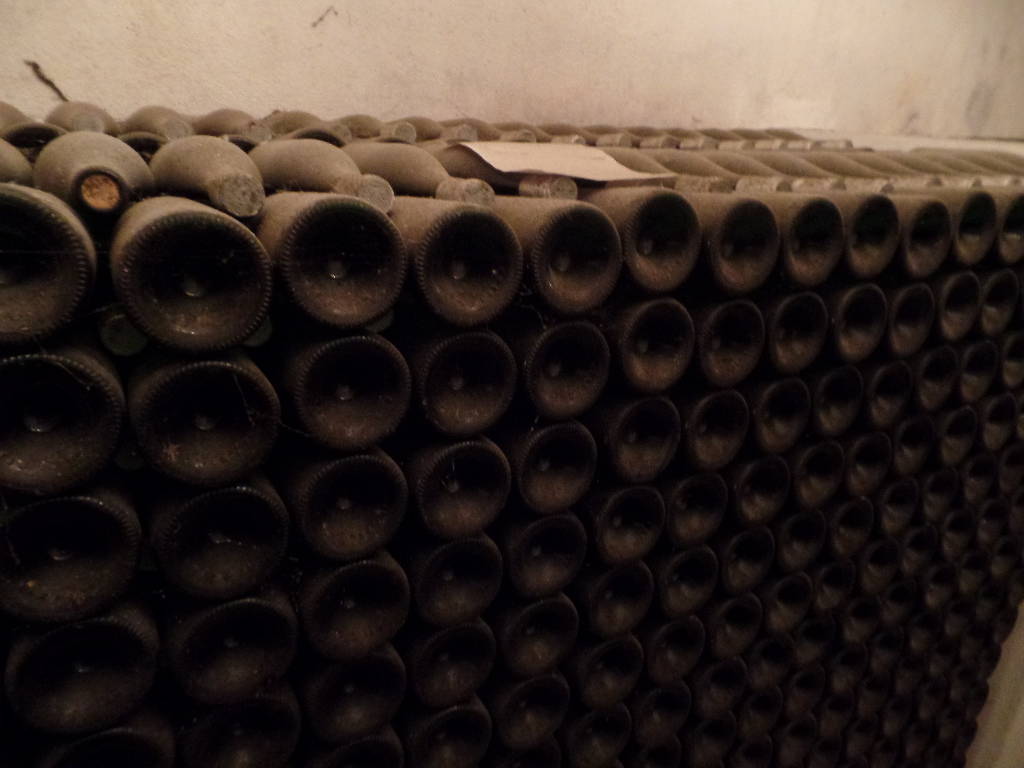 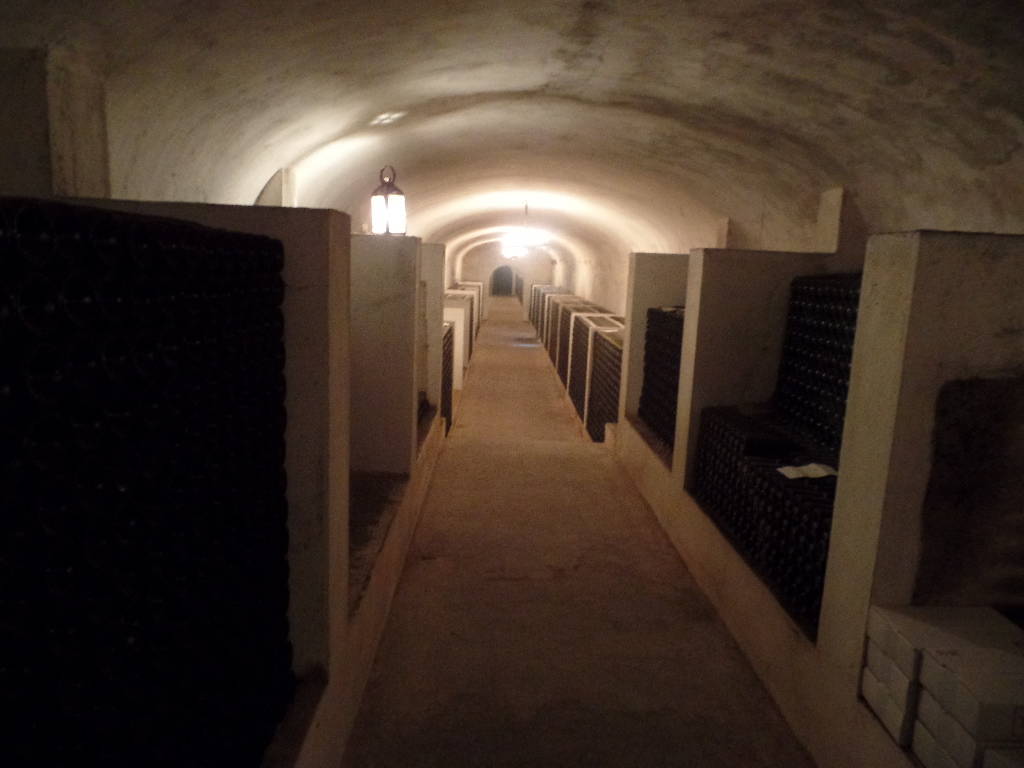 Last week Mark hauled out wines from 7 vintages, one from each decade spanning from 1940’s to 2000, from his personal collection, to present at a tasting at one of our wine clubs. 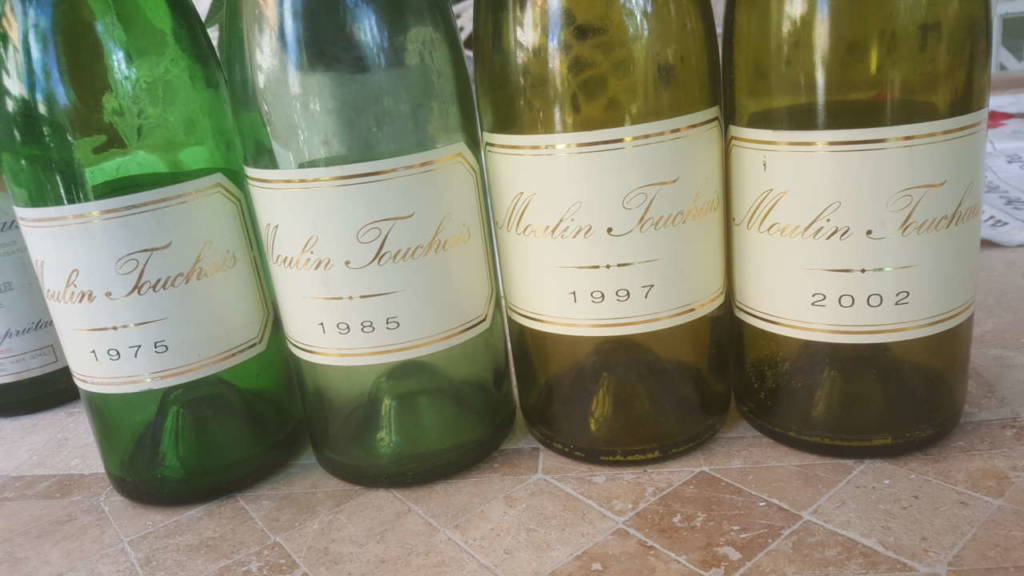 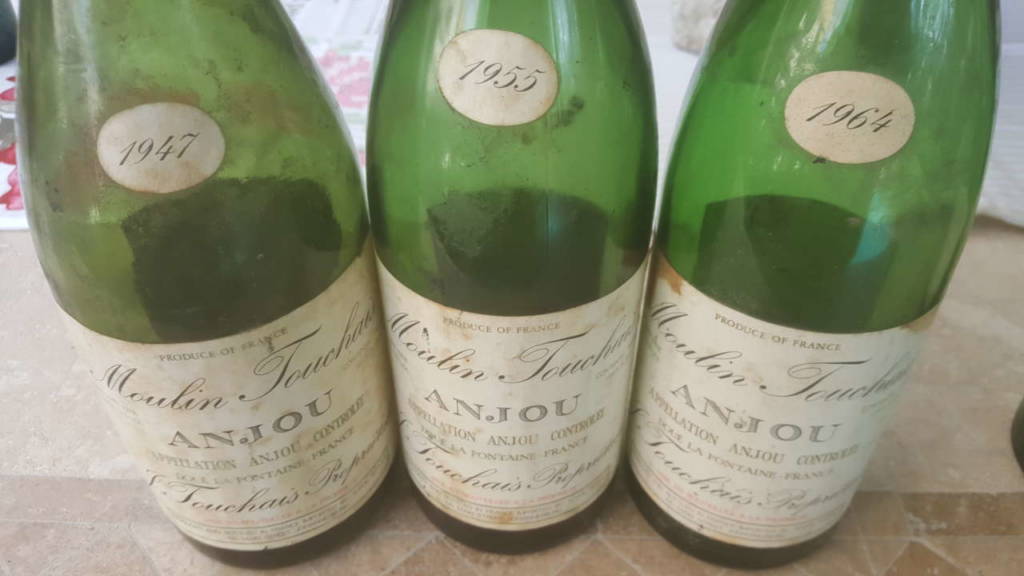 Tasting 7 of these wines on their own can be a challenge on the palate so we decided to pair them with food.  We met with the chef at 96 Winery Road Restaurant and this was our menu: 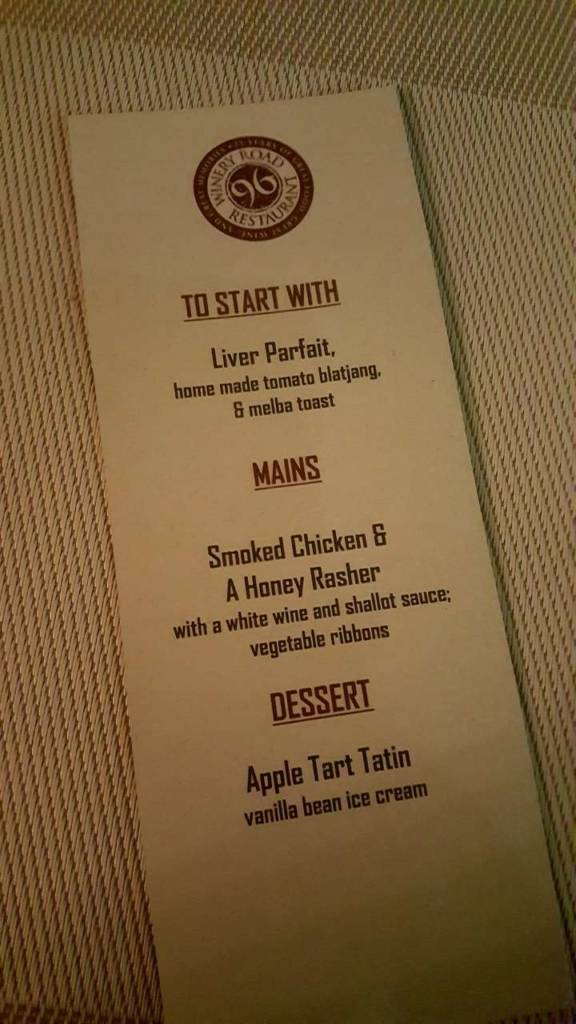 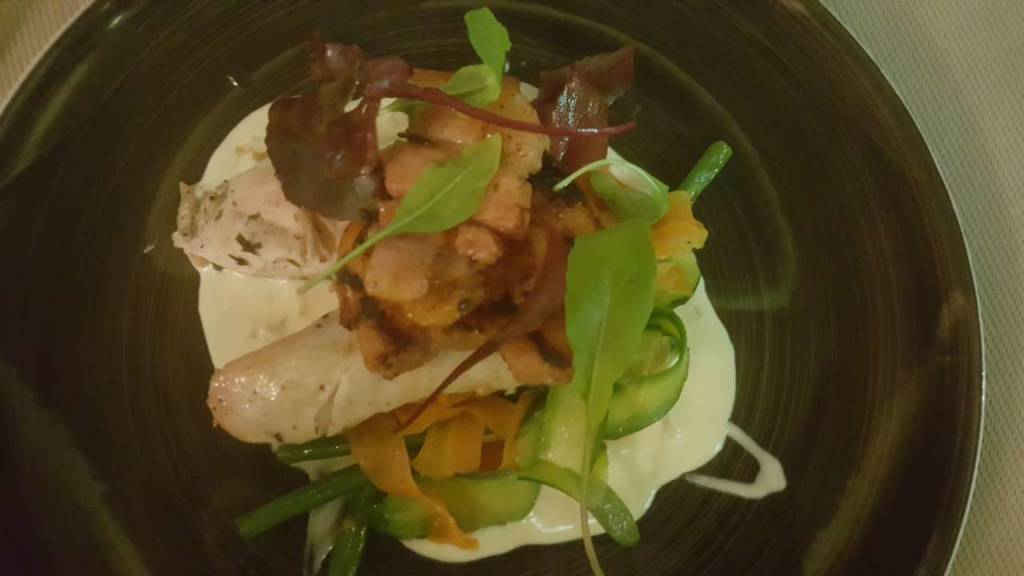 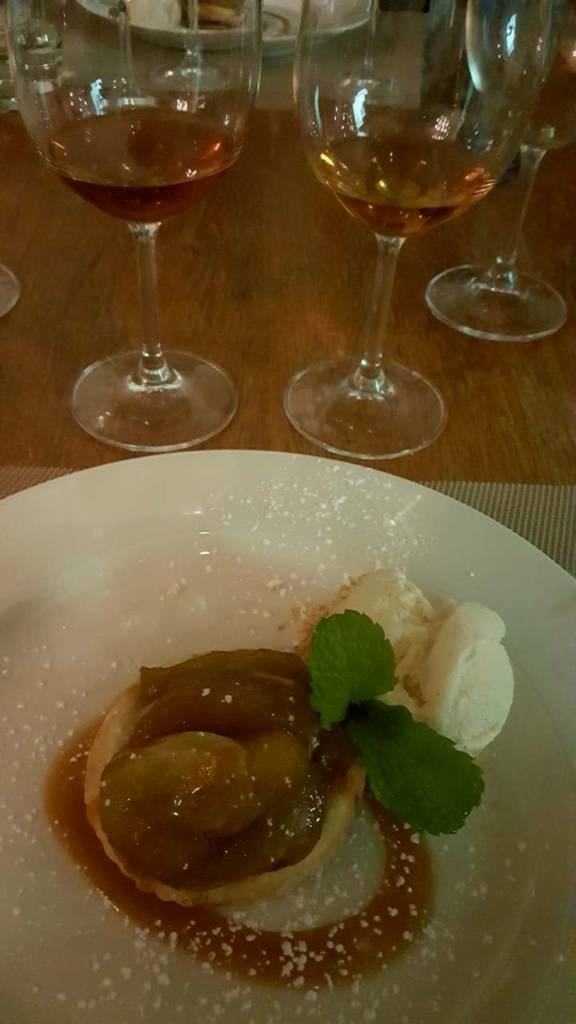 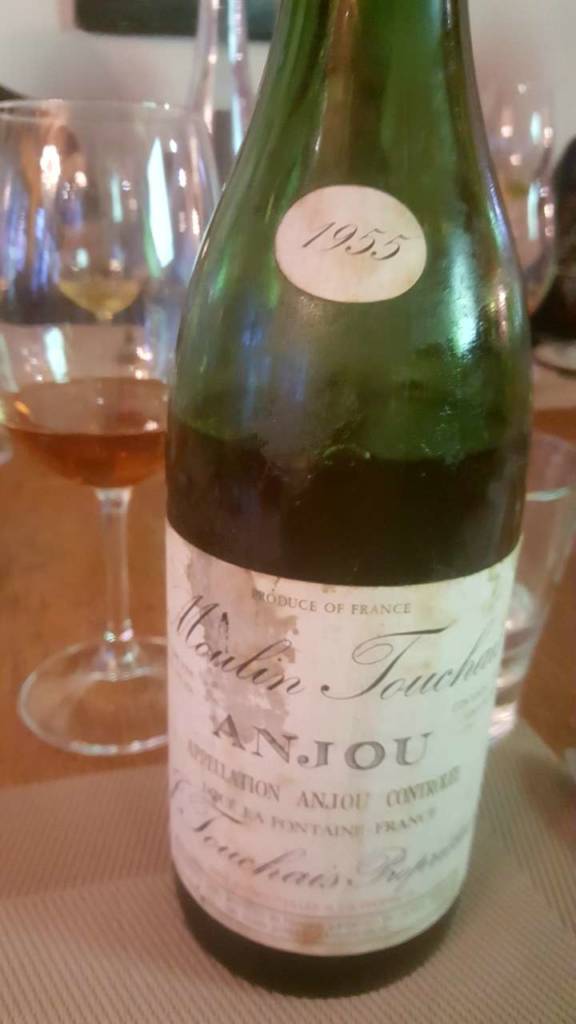 A memorable tasting experience! The favourite wine of the evening was the 1942! At 70 years the wine was still fresh and had a delicious mineral, pecan and apricot character!

A thought…… if you find a chenin that is a little too acidic, should you put it in the back corner of your cellar for 10 years? 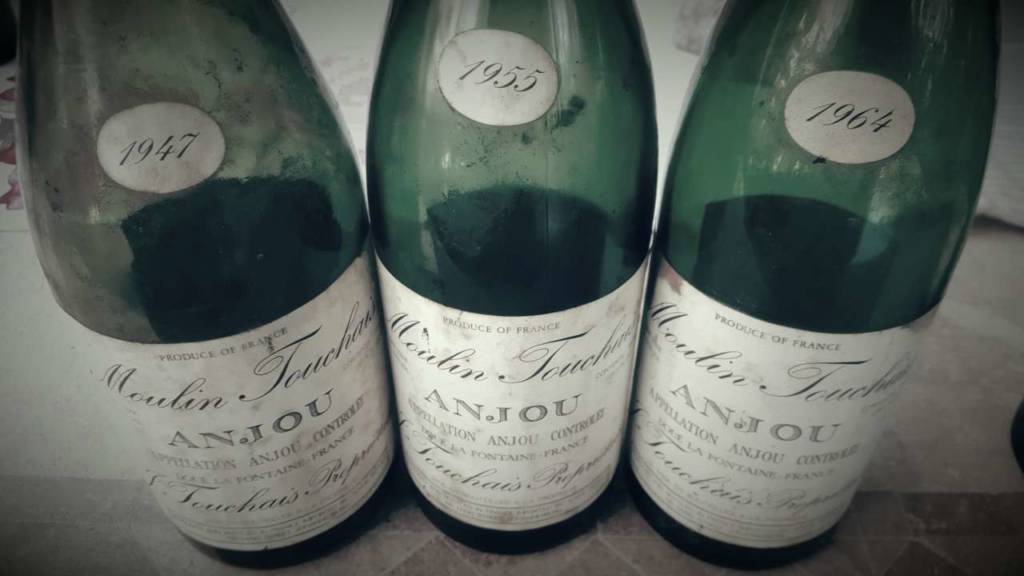