I have heard of a few celebs naming their children Saffron, and one day I may grace a ginger cat with the name!

It is in the culinary world where this ingredient is most revered. I am not sure whether I fully understand why, but as with most things ‘rare and expensive’, this is the case.

The flavour is best described as ‘delicate’ and I have never really embedded a clear flavour profile in my brain. Experts describe it as ‘metallic honey, hay-like, grassy mushroom undertones’ and if overused ‘pungent, bitter and metallic’.

So why on earth use it? It is said to add depth of flavour to dishes, usually those containing seafood and rice. It is commonly used in Spanish Paella, French fish stew/soup Bouillabaisse, Milanese Risotto, Middle Eastern and Indian rice based dishes, Moroccan Tagines and it is also used widely in the Middle and Far East in desserts and sweets.

But I think it is really the deep golden yellow that adds an exotic depth of colour to food that makes it special. Turmeric is used as much cheaper replacement and I think turmeric also adds some depth to the flavour, so if don’t have a stash of saffron, use turmeric! 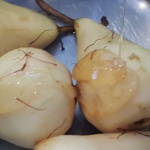 Just a few threads of saffron and honey added 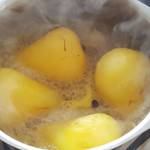 give a beautiful golden colour!

Why is it so expensive and scarce? Saffron is the deep rust-red coloured stigma of the beautiful purple crocus flower. Each flower only produces 3 stigmas and it takes about 150,000 flowers to produce one kilogram of saffron. Can you imagine the labour required to harvest and dry these golden threads? The flowers grow wild in the Middle East and Asia, and are propagated in Spain and North Africa (Morocco, Tunisia and Egypt). The La Mancha region of Spain is said to be one of the world’s largest commercial producers. 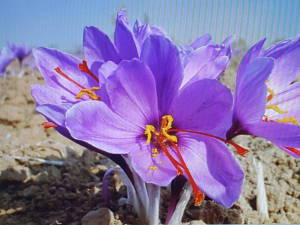 Thankfully only a few threads are required to add that delicate flavour balance and deep yellow tone to a dish.

There is no clear nutritional value of saffron, even though it is said to be an anti-inflammatory and aid digestive orders. At the price you pay for it, it is probably required to do so!

Saffron is also widely used in fabric dying, particularly in Asia where it is still used on expensive silks and hand woven carpets.

In markets in North Africa and Asia saffron is often offered at bargain prices, but sadly, as with most highly priced or rare commodities, the market has been exploited but offering ‘fakes’. Edible lily stamens are dried and offered, so beware. Rather buy it from reputable producers, but that too, is difficult to assess!

We usually buy exotic ingredients when on our travels. I have bought some in Spain and Morocco and occasionally use it in a special dish, but frankly, other than the rich golden yellow colour imparted to the food, I’m not sure what the hype is about!