One of the joys of travelling is eating traditional dishes. Once I have experienced a dish in its original environment it is often difficult to replicate the flavours and textures.

In Spain we feasted on several versions of Paella. Some were rather unimpressive and obviously catering for the mass tourist market. Then there are those magnificent experiences that remain embedded in your ‘flavour-texture-atmosphere’ memory!

Once I had made it and mastered the techniques I find that with Paella, I am able to replicate those food memories quite well.

For years I thought that it was simply too much effort, but it is such an easy dish to assemble and it is ‘one pot dining’! You can jazz it up by adding more seafood, even crayfish! I once had a stunning duck paella in Europe. Often squid ink is added to seafood paella to give it a depth of flavour and very on trend black colour.

The key is using the correct basic ingredients 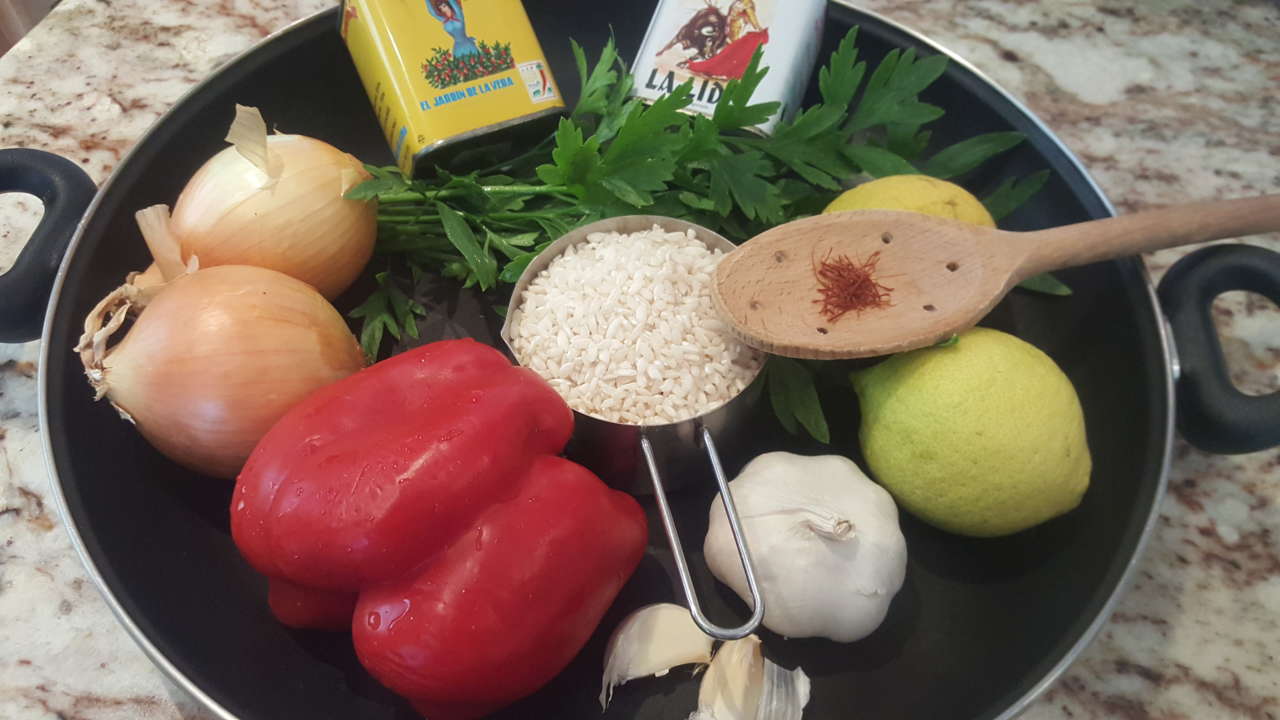 Using the correct rice is essential. As with risotto you need to use short-grain rice. Spanish Bomba is the best variety, but that is difficult to find outside Spain.  I use Arborio, the same rice that I use for risotto. I have however used the local long grain rice (Tastic!) and the results have also been good. The rice needs to absorb the liquid and stay firm during cooking. When the dish is ready the plump rice grains must separate and not cling together.

Then there is the stock. Don’t be tempted to use stock cubes. They are too salty and are often laced with MSG. If you have not had the time to cook a fresh stock there are very good quality stock concentrates in sachets or tetra packs. In South Africa I use Ina Paarman’s powdered stocks. 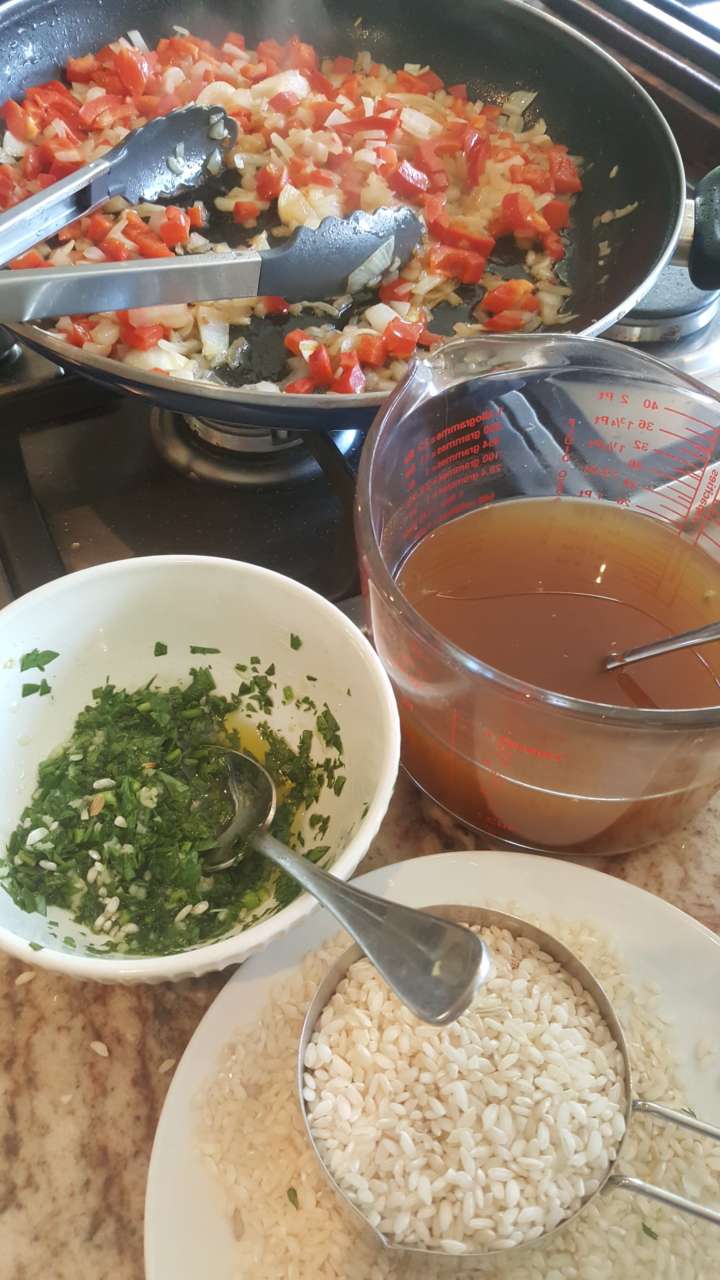 The spices include Spanish paprika. Try to buy the genuine product. I love the traditional Spanish paprika tins that you find in the Spanish markets and local delis. There are three styles of paprika, dolce (sweet), picante (spicy) and smoked. Paella is not a spicy dish and so dolce is usually used. If you cannot buy the Spanish paprika, buy from a reliable spice house or supermarket where you will be assured of the most authentic flavour. I you would like a slight chilli kick use the picante.

Saffron, the king of spices is traditionally used. I am not 100% convinced that this spice actually contributes much to the flavour, but as I have a stash of threads in the pantry I use it. It does impart a delicate golden colour. If you don’t have saffron at hand, simply use a pinch or two of turmeric.

The protein component is usually Spanish Chorizo, Seafood or Chicken. I have never had a Paella using red meat! One of my guests did not eat pork so I omitted the Chorizo, which is normally added. I am not a ‘surf and turf’ person, but this is one of the rare occasions when I combine seafood and poultry. The trick is to use the protein in the correct order. Chorizo normally adds flavour and dissolved fat to the pan so it is added early. It is essential to brown the chicken skin and to start the chicken long before you add the delicate seafood towards the end of the cooking process. 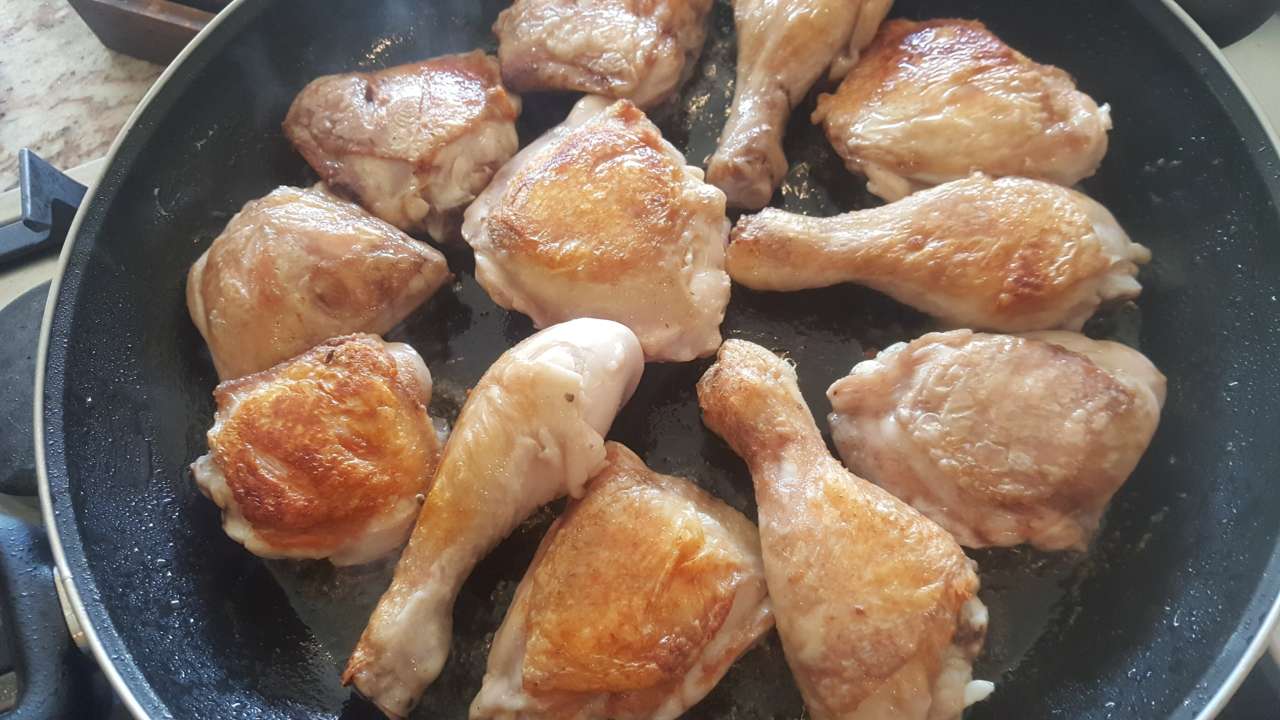 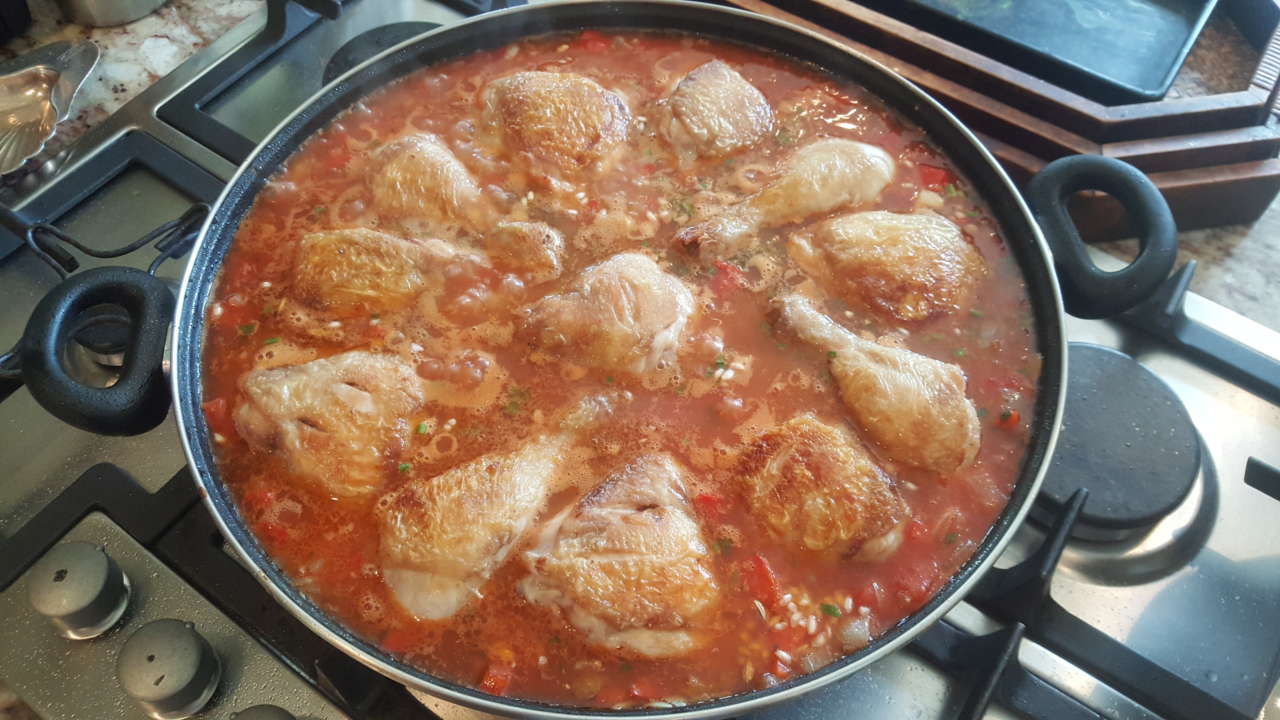 The paella pan is important. It is a wide shallow pan with two handles. I have had a few in my day, but my favourite is a traditionally shaped, blue pan that my husband picked up in a second hand shop a few years ago. (I am not always charmed by his purchases, but this time the Man got it right!)

One of the special treats when eating paella is the crispy rice crust that forms on the base and sides of the pan. This is such an important feature of this dish there is a name for it, SOCORRAT! Socorrat comes from the Spanish word, socarrar, meaning to singe. Yes, to singe and not burn. This is achieved where there is a large surface area of the flat pan and opposed to Risotto, Paella is also not stirred allowing the rice to touch the hot surface at the end of the cooking process. This needs to be carefully controlled to prevent scorching or burning, and spoiling the dish!

Other flavour and vegetable additions vary, but my philosophy is rather keep it simple than throw the contents of the grocery cupboard and fridge at it!

Vegetables always include onions, garlic and tomatoes. Peas and corn can add interest and colour.

If seafood is used citrus such as lemon and orange are delicious. I have also added fennel with seafood. As mentioned above, squid ink is often used with seafood.

Experiment but try not to go too far from authenticity with this one. 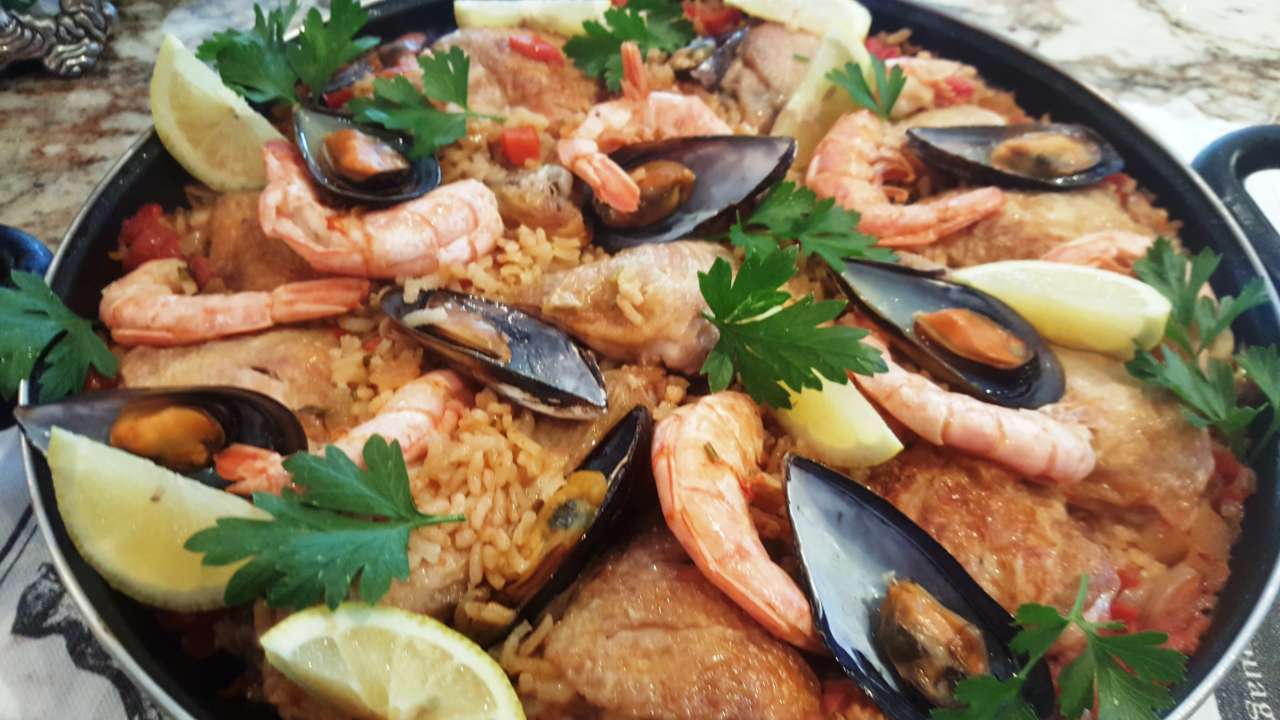