Chicken Tikka, not quite Caesar, salad! 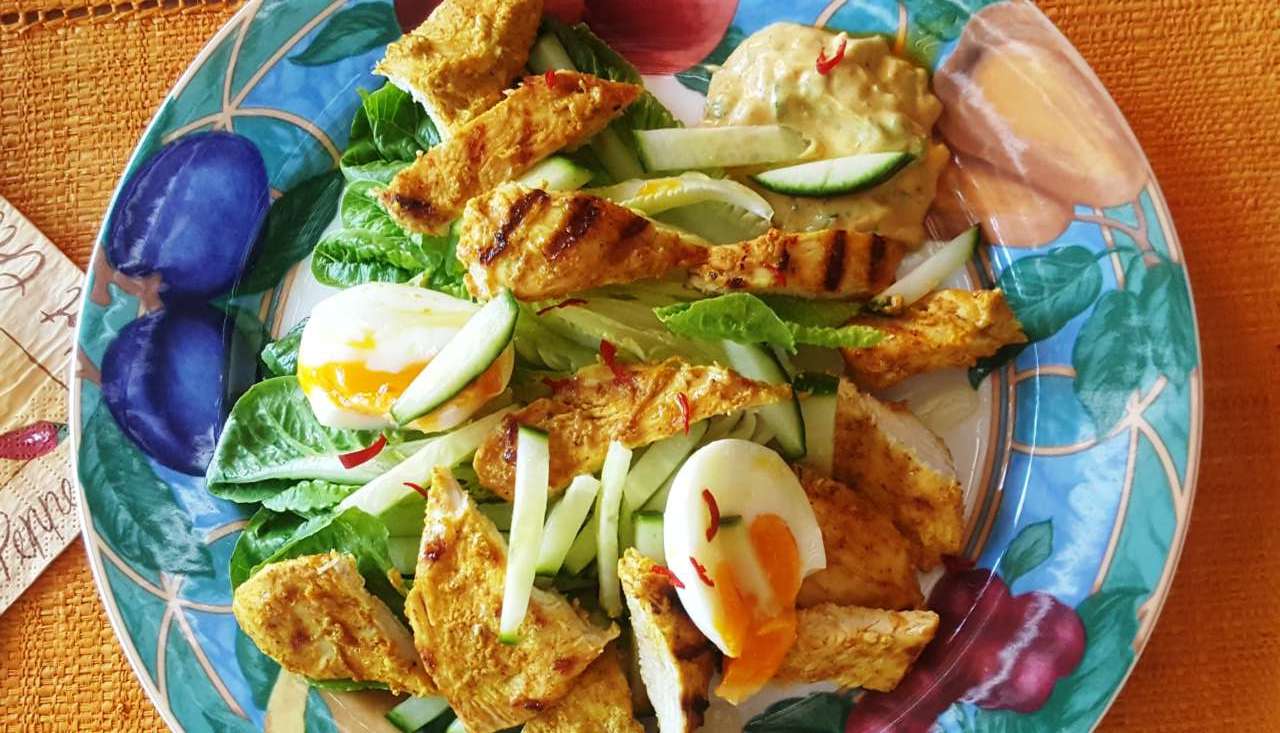 It is thought that chicken tikka masala was invented by an immigrant Pakistani or Bangladeshi chef in England in the late 1960’s. By the 1980’s it was so popular it was the craze in England.

In the late 1980’s I visited England frequently when I worked as a product developer for a large supermarket group. During this time I probably saw and ate every version of chicken tikka ever invented! The British famous BLT (bacon lettuce & tomato) sandwich stood aside as Chicken Tikka sandwich sales soared to number one! There was chicken tikka salad, pasta, filled baked potatoes, tikka topped pizzas and chicken tikka soup.

Kids took chicken tikka to school in their lunch boxes, morsels were served at the posh cocktail parties and it was served for family suppers or at dinner parties, and the trend continues today! No wonder it is now proclaimed as Britian’s National Dish over bangers and mash and cottage pie! And the flavours have become popular globally.

I must admit that I can never tire of chicken tikka. It is by far my favourite ‘Indian’ dish. I always have a jar of tikka curry paste in my pantry. There are a few commercial pastes that I find acceptable and when time strapped it beats having to dirty the blender. Occasionally I prepare my own paste but for a quick  marinade a good quality commercial paste is perfect.

There are two styles of Chicken Tikka, the one is where usually boneless pieces of chicken are marinated and then threaded on skewers and grilled in a hot brazier or tandoor. Bone-in portions may also be used. This version is said to have originated in the Punjab region of India, Bangladesh or Pakistan.

Then there is Chicken Tikka Masala. This is a moist, casserole style dish where there is more sauce. It is usually made with boneless meat. The sauce is yoghurt based, sometimes coconut cream is added. Fresh tomatoes or tomato puree, spices and onion forms the base.

In both these dishes the sauce has an orange colour, which originates from pureed tomatoes, chillies, paprika and turmeric. The sauce is mild and creamy and the chilli kick can be adjusted according to taste. 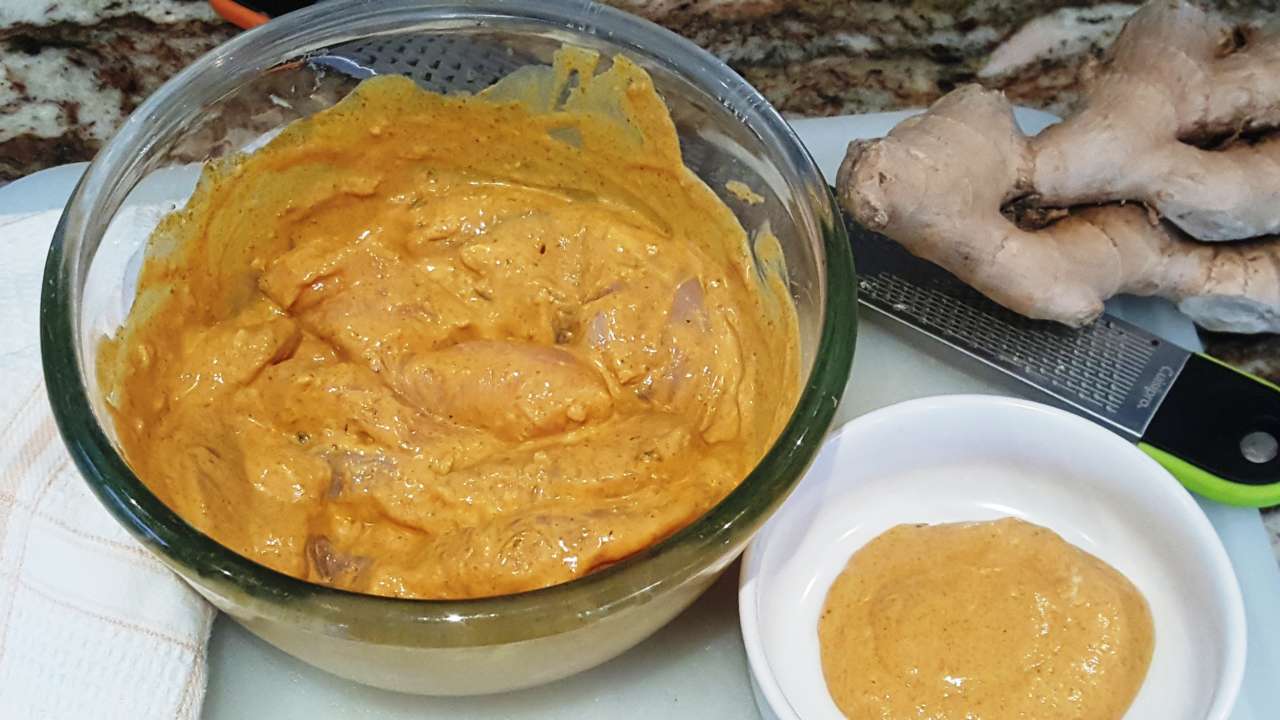 I like using the tikka marinade on chicken, either for the braai, oven grill or grill pan. It is so easy, I simply grab some full fat plain yoghurt and add a few spoonfuls of the commercial paste, add some fresh ginger and a squeeze of lemon juice. In the recipe I give an alternative to oven bake it. 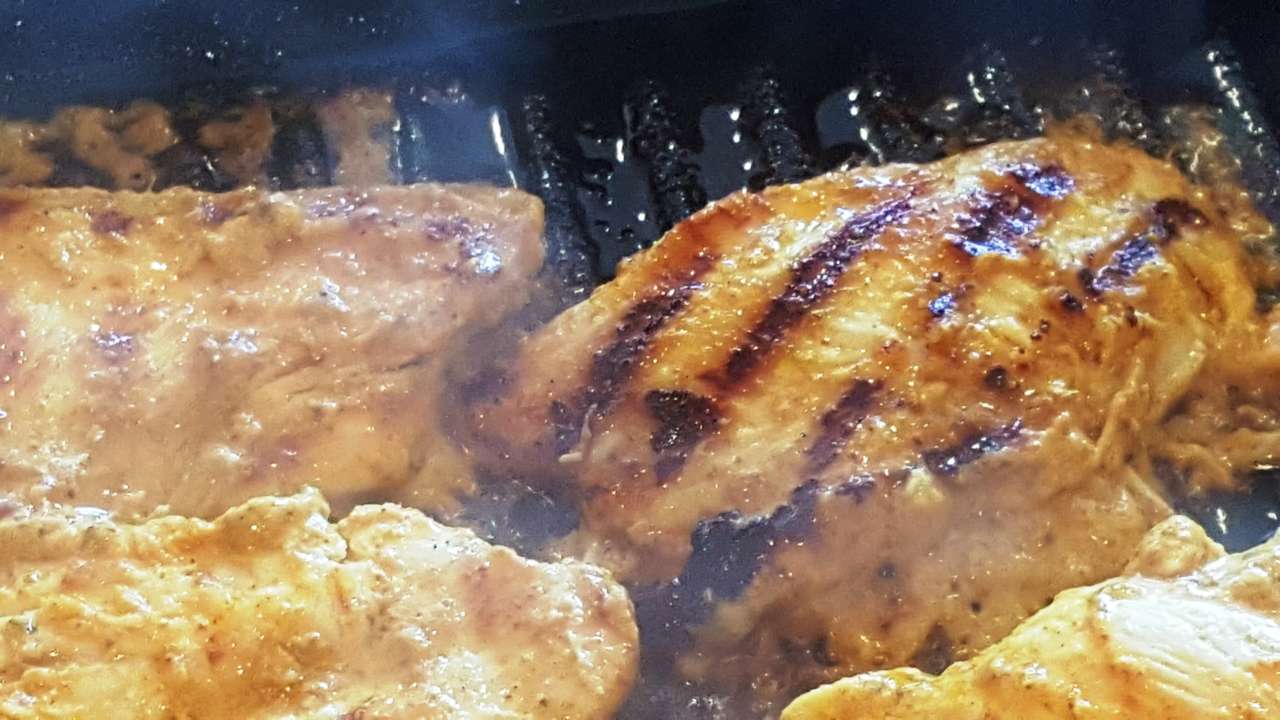 When making the chicken tikka masala it uses a few more ingredients, but that’s a wintery dish for later in the year.

A salad was born 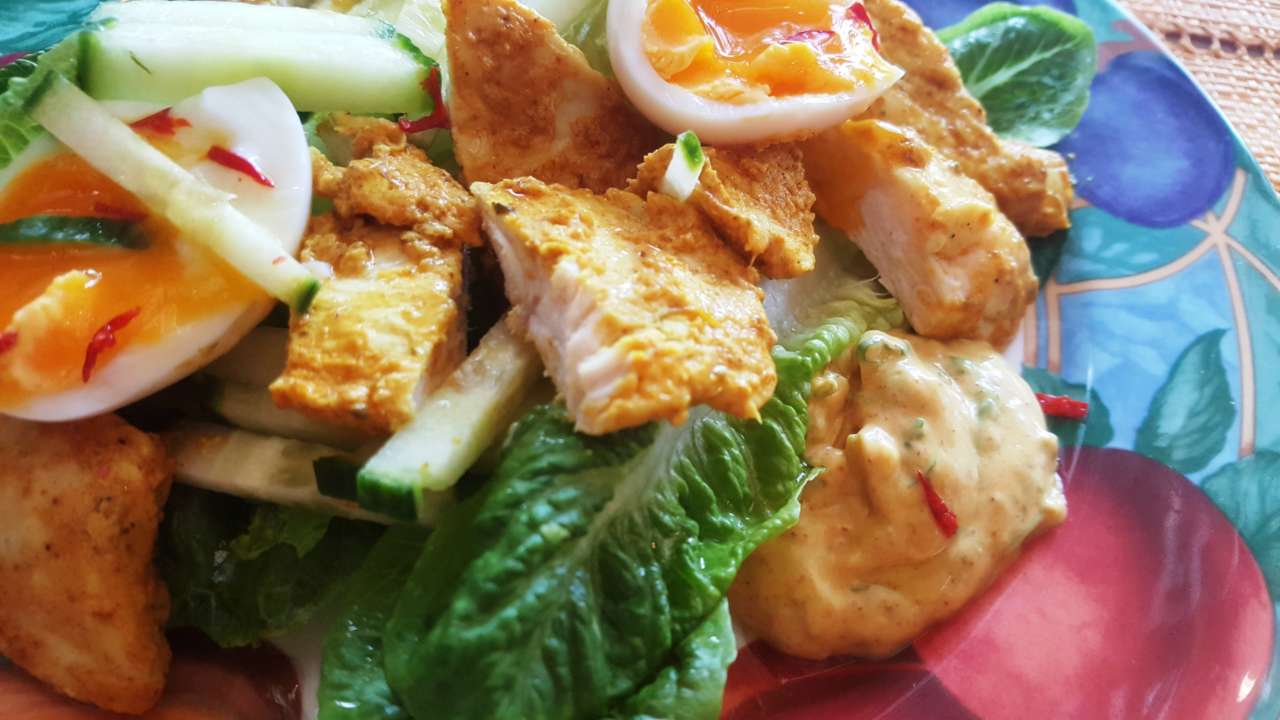 Last week I had friends to supper on a very hot summer evening which called for nothing more than a salad. I also had a yearning for soft boiled egg and crisp Cos lettuce, but needed more than a basic Caesar salad, so made this Chicken Tikka crossed with Caesar, talk about FUSION at its best!

You can use this basic salad and build on it by adding pasta (great when catering for crowds) or another grain such as my current favourite, quinoa.

The salad comes with a creamy curry dressing that is served separately.