The origin of this dish is not clear, but this appears to make some sense: In one reference it is said to come from an ancient Roman dish where ground/chopped meat, probably lamb or goat, was layered with pine nuts and herbs and centuries later, in the Cape, the spices were introduced. So, it appears to be truly global in origin!

The Dutch colonised the Cape in the mid- seventeenth century and later they established the Dutch East India Company. At the time they also established trading posts in India, Malaya and Indonesia, were they traded in spices. When the Dutch required skilled craftsmen to assist in establishing a lucrative lifestyle in the Cape, they brought political exiles and highly skilled slaves from their Eastern Colonies. These ‘Malay’ slaves contributed to the Cape’s distinctive architecture, the fishing and textile industry (many were highly skilled seamstresses).  They were also superb cooks.  Of all the cultures, it is the influence of Malaysian and Indonesian cuisine that made the biggest impact on traditional South African dishes. They introduced exotic spices and depth of flavour that have been adopted across Southern Africa. 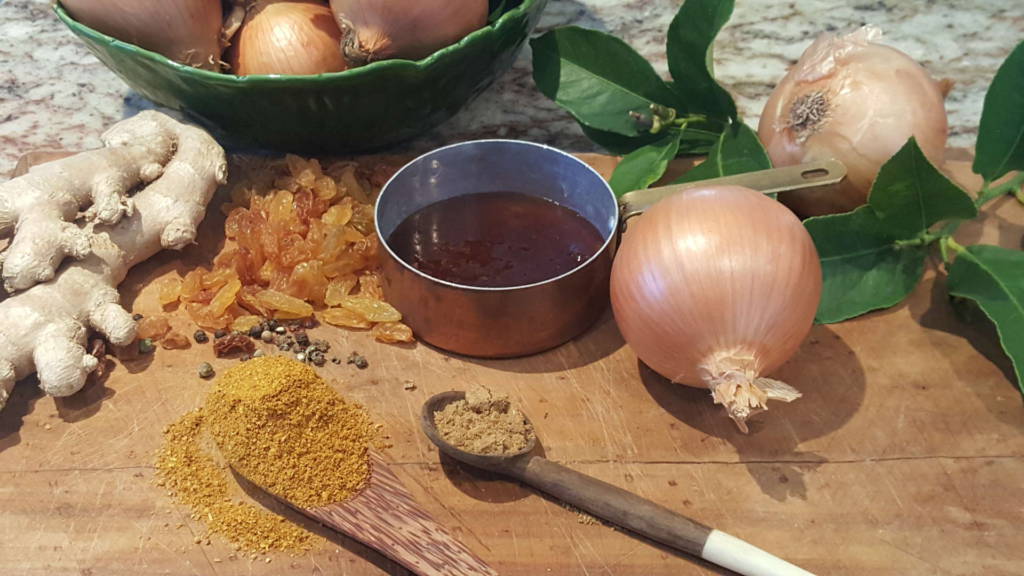 Bobotie is a dish that has become an iconic South African dish. As lamb is very expensive it is seldom used. I do however recall my mother using left over roast leg of lamb on our Karroo farm, to make memorable bobotie. Today beef mince is most commonly used. It is basically a savoury mince, flavoured with spices and is topped with an unusual egg custard and oven baked. I’m not sure where the custard influence came from, but this draws me to the Middle East where egg and meat are sometimes combined.

Sadly very few restaurants offer Bobotie, and if they do it’s often disappointingly insipid, so when we get that craving, I rather make it. It is a delicious winter family meal. Being mince based Bobotie is a fairly economical meal, making it an easy make-ahead meal for crowds. Bobotie freezes well. I sometimes make a large batch and bake the bobotie in smaller freezer to oven dishes. Just allow it to defrost before reheating in the oven or the microwave.

It is also a lovely Traditional dish to serve to visitors to South Africa. Treat your guests to a complete traditional meal by serving a smoked snoek (smoked oily fish, similar to mackerel in flavour and texture) starter. I like doing an avo based salad topped with smoked snoek, and maybe add some African fusion with a chakalaka dressing! Then finish the meal with traditional milk tart, milk tart soufflés or mini milk tarts and koeksusters. 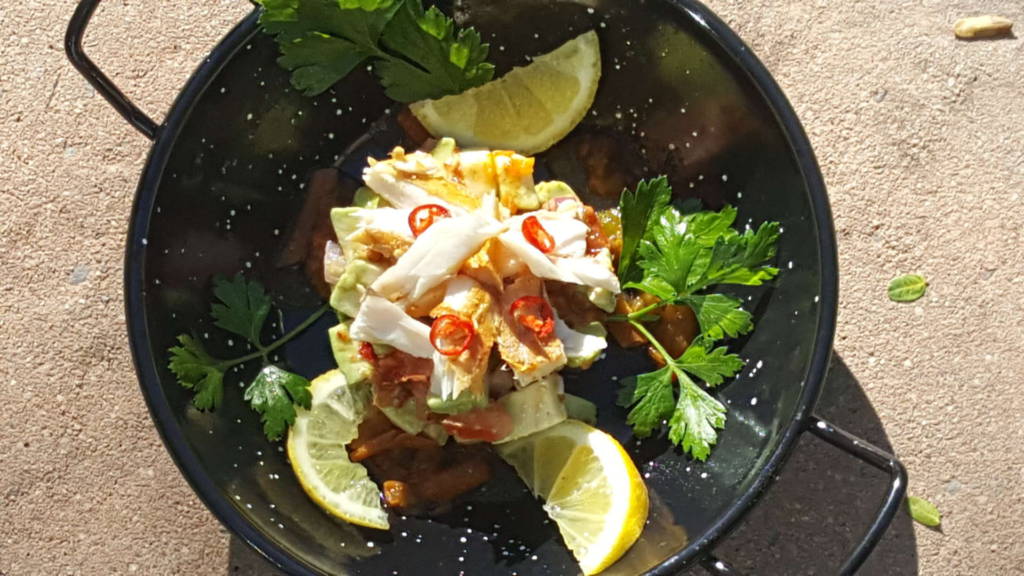 A light starter of Avocado and Smoked Snoek

Traditionally bobotie is cooked by adding sautéed onion and spices to raw mince, but I like to lightly sear the mince. This has two advantages, one of being able to taste mince and adjust the seasoning if necessary and it shortens the oven time, a bonus with high electricity costs! 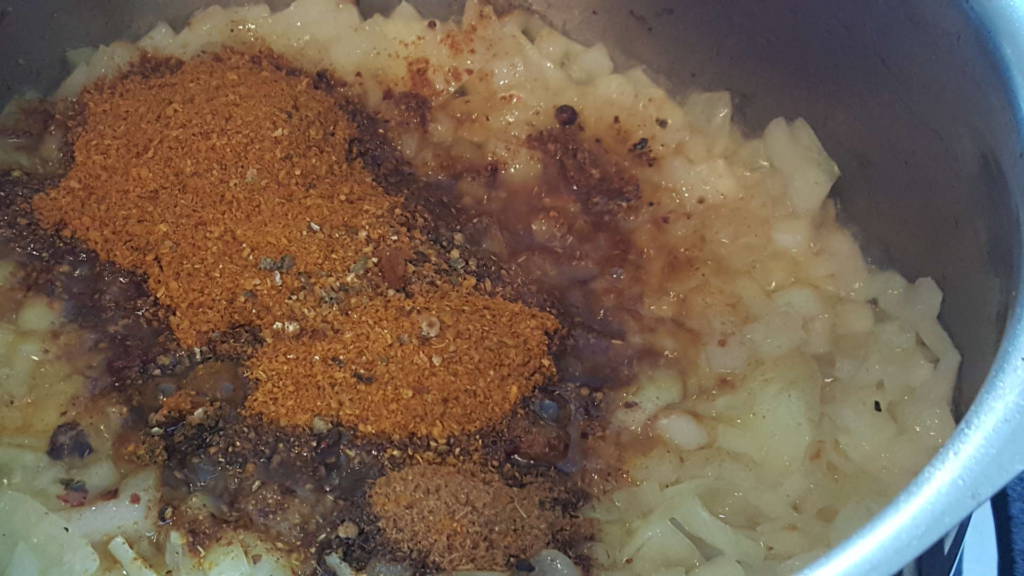 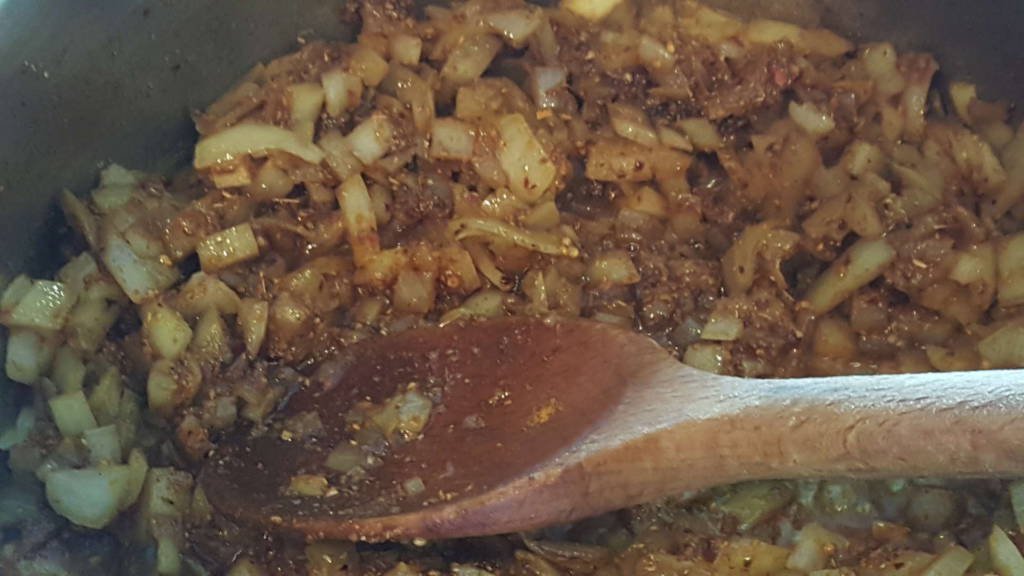 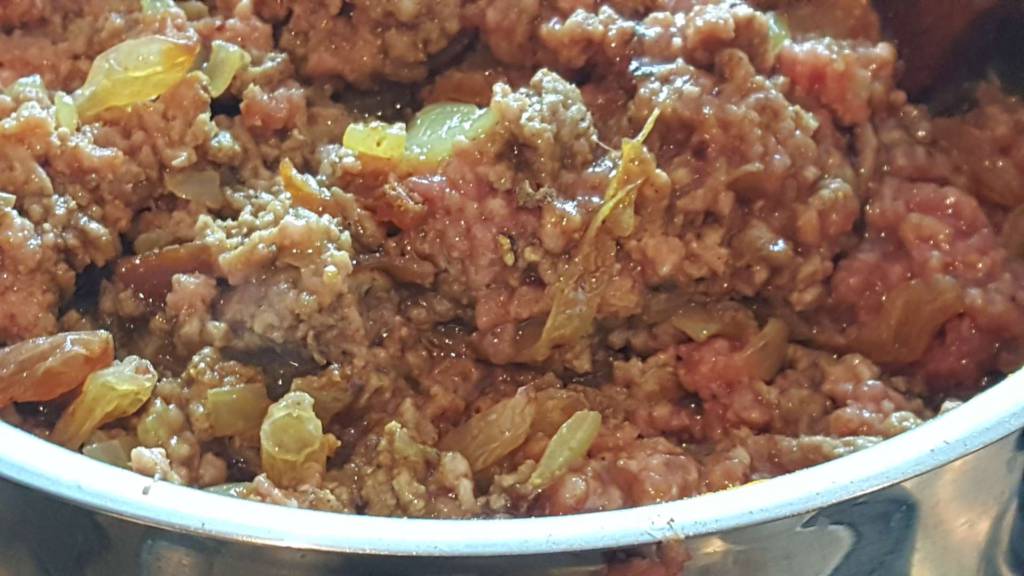 I also do not add the traditional white bread soaked in milk to my recipe. I add about 45ml of potato flour or a gluten free flour mix. This accommodates a family member who is gluten intolerant and it is also convenient as we never have white bread! The starch binds the meat juices, giving a succulent rather than watery dish.

If you cannot find meat masala and you do not have the ground spices, then you can use a good quality medium or hot curry powder. The addition of beef stock powder is by no means traditional but I feel that it enhances the flavours. Some supermarkets offer a Bootie spice pack. These work well, but I find that I still need to add additional chilli and cumin. You seldom see recipes calling for fresh ginger, but we like that flavour dimesion.

You can use the usual milk and egg custard topping but I love my version using yoghurt and lemon zest as it adds another favour dimension. 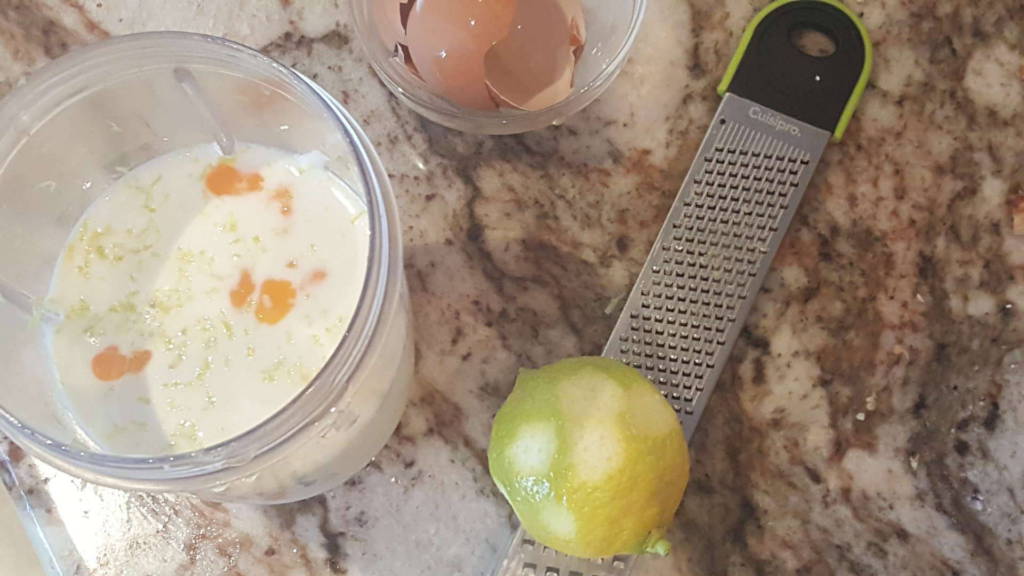 If you do not have fresh lemon leaves use either fresh or dried bay leaves. 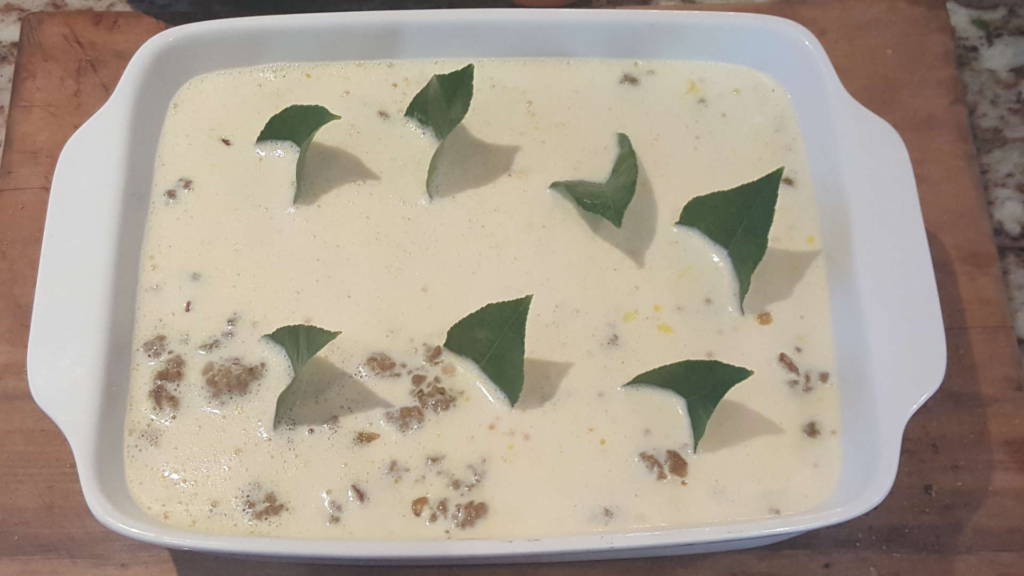 Bobotie is traditionally served with white rice to which you add turmeric, turning it a golden yellow. If you have not used sultanas with the meat, you can add a handful to the rice.

I prefer to use a wild and brown rice mixture, which is not traditional, but adds lovely nuttiness and plenty of fibre. 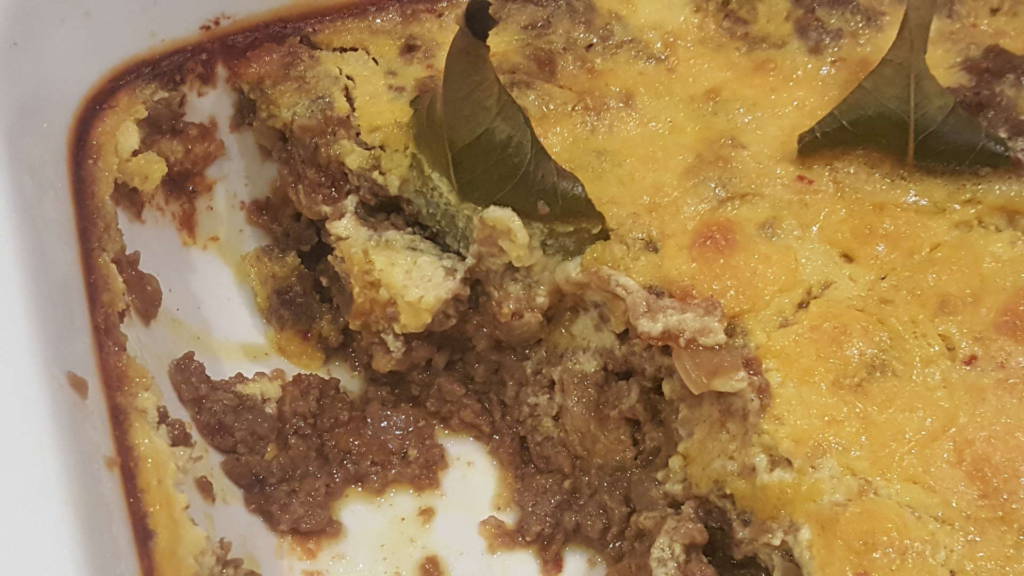 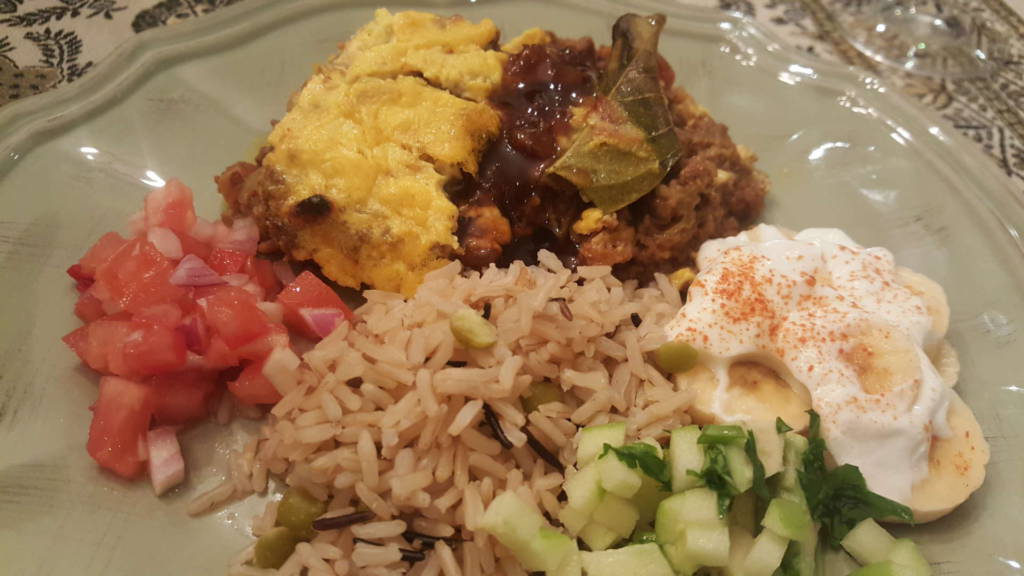 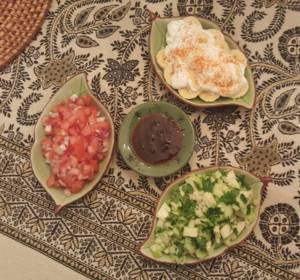 Accompany the dish with sambals that you would usually serve with curry e.g. green apple and coriander, with a lemon dressing; cucumber or banana and yoghurt; fruit chutney; diced tomato with chilli, red onion and a splash of wine vinegar