“One of the best known traditional fish dishes of the Cape is also one of the oldest and undoubtedly of Eastern origin.” Louis C. Leipoldt, a well known Cape historian who loved cooking.

It is an unusual dish, as it is always served cold. It is best made well ahead of time and should be served after at least 7 days maturation in the fridge. It has a shelf-life of at least 14 days, so I usually make a large batch.

Many religions dictate that meat should not be consumed of Easter, so it has become a tradition to serve pickled fish in South Africa over Easter. It is a refreshing lunch dish on a sunny day, served with rice or pasta salad and a leafy green salad. Smaller portions can be served as a starter or try it as an innovative fill for a wrap or a tortilla. 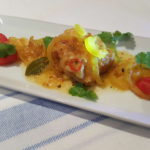 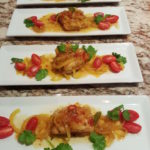 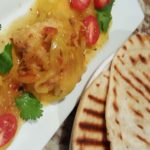 Serve with a flat bread

There are several versions of the recipe in various traditional Cape books. I have used my Mother’s recipe and offered interesting variations for you to experiment. Once you have enjoyed the home-made version you will be reluctant to buy the ready made one from the supermarket or deli.