Crunchie (Oat) Biscuits, a sweet treat with a healthy twist 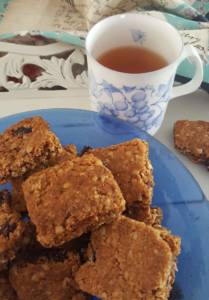 Crunchies or Oat Biscuit Squares were one of my favourite biscuits that my Mom packed into my ‘tuck box’ when I was sent off to boarding school.

I have often made her recipe, (Mom’s Crunchie Biscuit recipe) but over the years I have added my twist to it. It is fascinating to see how ingredient fads, fashions and science can affect a recipe and what we choose to eat.

When we were young and living on a farm we had never seen or heard of margarine. Our herd of Jersey cows provided us with plenty of milk, cream and butter. By the mid 1960’s foods such as butter, eggs and avocados were totally unacceptable as the new word ‘cholesterol’ entered our vocabulary, so most of Mom’s baking recipes from that era call for margarine instead of butter. Margarine was also the cheaper butter substitute in the lean years after the war. How sad that we were deprived of butter for so many years!

As a student, I did a research project on the nasty effects of cholesterol and saturated animal fats on the diet, so we all converted to margarine. Thankfully science has turned a full circle and we can once again enjoy the flavours of butter, eggs and natural ingredients in moderation!

Now the ‘go to fat’ is coconut oil. When I see its waxy consistency I just imagine that clinging to the artery walls, but that is my opinion! I have bowed to nutrition advice and now occasionally use coconut oil in my biscuits, mainly due to the claimed health properties, but I also think it adds a good crunch, but for a richer flavour butter is still the best. I will leave it to you to choose your preference! 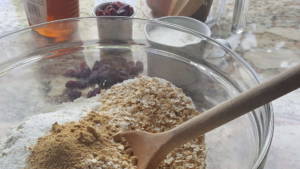 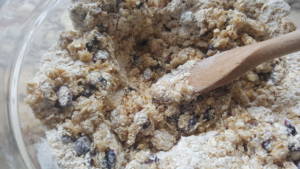 I have also substituted the golden syrup with honey, mainly for the flavour. The bicarbonate of soda and heat destroy honey’s antibacterial properties so we cannot make any health claims here! I also try to replace white sugar with golden demerera or brown sugar, mainly for the flavour. I tried replacing more of the sugar with honey, but it became an expensive exercise and I think the sugar binds the ingredients, with a crisper and less crumbly result.

While on the subject of flavour: I add ground cinnamon and ginger, and vary the following depending on my mood and what is in the pantry: chilli flakes, grated orange zest, candied citrus peel, dried sultanas or cranberries

So please try my current Crunchie Biscuits with Cranberries and a hint of spice! It is a delicious snack with a cup of tea or coffee, and quite a healthy one too.